The traditional dance of Bali was performed in our neighborhood yesterday. A local choir with about 80 singers (150 when we asked our landlord, who is a part of the performance) made the backdraft for three different dances.

Sita (we think a princess) dancing.

The first dance is a story, like a fairy tale. With both love, evil, magic and fighting. What more can you ask for?

We saw some dancing at the hotel in Sanur. Down there it was one or two in the stage at any one time, and they danced only single scenes out of larger stories. This Dance was a 5 act show with larger costumes, the choir (must not be confused with symphonic choirs by any means), and vivid dancers. We enjoyed this part, as we had read the story and new who was good and evil. Even though we had been through the storyline it was sometimes hard to guess who was the son of the Evil Spirit. But in the end the bad guys got chased out of the stage. We took it for what it was worth and applauded the winners. 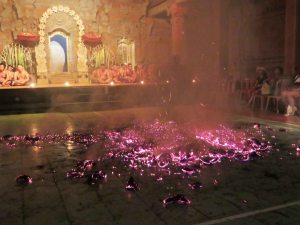 The trance dance was a joke. Two underaged girls are supposedly put in a trance and dances synchronized. We can safely assume that neither was in a trance, and one of them was not even sure about the moves. Quite a low performance actually. Still, what can you expect from young girls with little to no education or training. And as the girls are supposed to be underaged, it’s a maximum time you can fill that role.

The last dance is a man on a wooden horse dancing around a fire. The fire is really hot (Duh! It’s fire…) but it is coconut shell they burn. Which make it a quick burning fire with lots of heat. Smoldering coconut fat is hot! This dancer is also “entranced” and may or may not go into the fire, according to the paper handed out with the tickets.
This guy played better than the two girls and he went all ballistic on the burning heap of coconut shells. He stepped in an kicked it, so fragments went all the way to the people in the front rows. Then a couple of old guys ran in with rakes, and gathered the fire back into one heap again. Over and over he danced into the fire (Duran Duran, anyone?) and kicked the shells pall over the floor. In the end he ran and “danced” on the embers on the floor and the to old guys with the rakes had to run in in flip flops and take him down. Remember, he was entranced. So they hold him down as he wants to go back dancing, but he regains his composure when the priest sprays him with holy water. 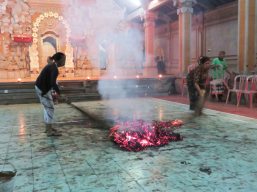 The women cleaning up after the show