So it’s time to move forward again. The next three days will be spent in and around Yangon before another chapter in the adventure is to be written.
It’s cold this morning. I mean cold! We have visible breath and it’s cold when the breakfast is served outside. We’re here during winter and thereby in the dry season, so if you go here in the months around year’s end dress accordingly.
After breakfast we get in the car and get taken to the airport. It’s a drive of about 45 minutes. The small villages we passed along the way was bustling with activity and there were markets up and running already. No rest for the wicked. 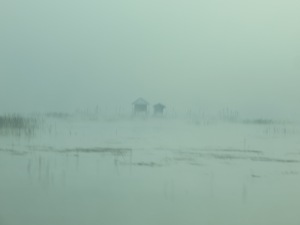 Yesterday afternoon and last night I have been struggling with my belly. Don’t really know what I ate too piss it off, but it’s quite aggressive. I’ve been up to the toilet several times last night and I just hope I’ll get by. The plane ride  down to Yangon is a short flight, but wet left all our medicines except for malaria pills in the big bags in Yangon. Real big shot world class experienced travelers, right?
On the ride up to the airport it’s a lot of fog. We agree that this does not bode well for the plane being on time.
The first thing we see when going to the check in counter is the sign saying the flights are delayed because of the weather. No specifics and no departure list on any of the tv’s. Yes they’re are tv’s here. Several actually, but they show some tv shows or commercials.

See the same mark on the tail as on the sticker?

Getting ready to leave the cold weather

The plane was decorated with Christmas decorations


We meet the Swedes inside the departure lounge (please read with the utmost extended version of the term lounge). They are taking another flight down to Yangon and will be spending a couple of nights there before they move on to Thailand. We catch up, complain about the weather and look forward to the warmth in Yangon.
While I do much to do about nothing on the bathroom they board their plane and are on their marry way. The planes are now taking off and we just sit and await our turn.
We are once again marked by stickers and have found some locals who have the same stickers. If they move we move.
We get on board and have an uneventful flight down. We get the one bag that’s been checked in and move outside to get a taxi. The heat is as it should be and in the cab we ditch the jackets and move around in shorts and t-shirts again. The taxi we end up in is plastered with air freshener and smell like the spray my grandmother had in the toilet back in the eighties. Even with all the windows rolled down wet almost suffocated. He took us to the National Museum and asked if he should wait. We politely but firmly declined.
We spent the next couple off hours in the museum. Another museum with no pictures unfortunately. But it was a nice experience even though my stomach was pretty upset.
We got out and went to the hotel. Luckily we got the room at once and even got upgraded to a superior room. Right, nothing really superior about it, but it’s a bit bigger than the one we had last time here.

I collapse on the bed and Katja takes a walk to get lunch and do a few things. I’m out for the next couple of hours and don’t wake up until Katja returns. I’m a bit better, but slow, groggy and sullen.

Shopping in one of the gangway crossings


I check the phone and see that our friend Mr. Ming well be by in about an hour to talk about tomorrow’s program. We kill that hour on the internet and then walk down to greet him. The people in the reception look very sceptical when we come down to talk to the uniformed Tourist Police officer, but it all smoothes out when they see the way we greet each other. We make a quick plan for tomorrow before he has to leave for work.
Now that I’m up and about we go out and look for the barber, he’s just closed for the day but tells us he’ll be open from 7 or 8 tomorrow. That being done we go to a pretty western looking restaurant and order me a burger. I’m really not in the mood for street food today. I eat the burger and immediately order another. With the two down we go back to the room and take the night.

The world is a book and those who do not travel read only one page.