We slept long today. I slept total of twelve hours, Katja a bit less. We got down for breakfast and back up to start packing.
We’re not leaving until tomorrow, but instead of packing tonight we do the job now in the morning. It’s been quite a while since everything had been out of the big backpack and I could shake out whatever dirty and gritty elements floating in there. Then another critical walkthrough of the content and another piece of goods bites the dust. Finally packed and ready to go we pack up what we want to send back home. It’s a few paintings bought in Bagan and the fruit knife that could land me in jail entering Hong Kong. First we go to the barber to get my hair cut. But there we found he’s closed on Mondays and we have to find another place to do it. 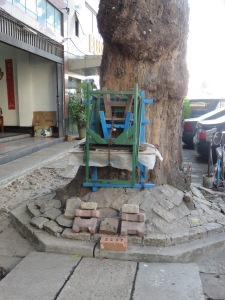 Next stop is the post office and we walk and walk along the streets between street vendors, monks, kids and elders. We enter a building that looks like a post office, but when we ask people they shy away like we’re the devil. Finally a man granted us mercy and explain  it’s down the street, not here. Well down the street we find the post office and we get to buy a few stamps, but send a package? No, that is a job for the central post office. OK, and thanks a lot.
We go to a coffee place near to the one we visited yesterday. Less people today and we got something nice to drink and eat. We’re now about to move in to the central post office to see if we can get the package sent. Fingers crossed.
Where to start on the central post office experience? Holy macaroni! We’ve used post offices in all the countries we’ve been to, and all have given extremely good service, even though they have had limited resources at their disposal. This us a fairly accurate account of what happened:
We go onside and easily find the counter marked international parcels. That’s a good start. We head over there and present our goal of sending a packet to Norway. We’re immediately sent to the neighbouring counter for some reason. There we encounter a man and a woman, and the man asks where we want to send it.
We: Norway.
Him: Nope, Norway it’s not on the list.
We: What?
Him: Nope, not possible by air.
We: Aha, but we don’t need air, we can do by boat.
Him: Nope again, no boat only air.
We: Double what? You can’t send to Norway?
Him: Yes, by EMS, (whatever that is.)

Then we got sent over to the next counter.
We: To Norway?
She: Yes, what are you sending.
We: Clothes and paintings.
Then she wanted to inspect the goods. We opened up and showed her.
She: Ok, but closed.
We: closed?
She: yes closed at one (note it was now 13:15)
We: but we leave tomorrow, can’t you take the package and send tomorrow?
She: no, closed.
Shit, not planned. They are open until 16:30 but closed International EMS at 13:00. What to do now? We try to go online to see if UPS is in town before we think of Mette. We can send it to Denmark, they are on the list for air.
We go back to the man in the first counter and ask if we can send to Denmark.
Him: Yes, what are you sending?
We: The lady right next to you just looked at it?
Him:?
Luckily the lady confirmed it.
Him: what size box?
We: something that is big enough.
He tries a couple of different boxes and find one suitable.
We: how much does it cost?
Him: Per kilo.
We: that’s ok, how much does it weigh? (There is a weight on the table in front of him.)
Him: but closed.
We: WHAT???
Him: yes, closed at one.
We: #@$/=#@@?+/=$$¢%£€][¥

At this point we could probably have broken something so we quickly exit the post office before we get in trouble. This is an example of some of the challenges this country have before operating on full capacity.

Want some duck neck for dinner?

Enjoying a little pineapple on the road

This is probably the post office. No? It’s not?

Finally we got some stamps. The longest in history!

I guess super foods means something else around here

Ah, a little space. Let’s set up a tea shop

Luckily we found a box of puppy love!

Harry Potter is here as well

We shrug it off as an experience and move just a block down the road to The Strand.
The Strand hotel is one of the famous places in the city as it was built in the colonial time, and escaped the bombing in World War II. It’s previous and original owners are the same as own The Raffles in Singapore. You know, where they invented the Singapore Sling. 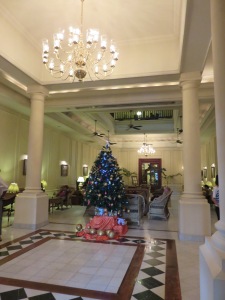 A little feeling of luxury

We take our lunch at The Strand to a ridiculously high price. It’s not even close to worth it, but it’s good to enjoy a little piece and quiet, decent service and ok food. We also got a decent internet connection and spend an hour here.
From there we walk all the way back across town to the hotel. Getting in a taxi would just mean sitting stuck in traffic. We get into some back streets and see a bit of the darker side of the city. Nothing scary, just poor and homeless. We are constantly addressed by locals. Some want to practice their English, some just want to tell me I’m tall and others want to sell us something. We have a nice chat with a man with the longest ear hair I’ve ever seen. You could make a broom stick with the two bushes. It’s a bit of a distraction, but he speaks good English and tells us about his children and what he’s been doing for a living.

Me and the ear-hairy gentleman

Making dinner in the streets

An old an once a beautiful building.

Just to give you an understaning of the bag size


As the barber wasn’t there today I have to get my haircut inside. There are several beauty salons in our street so I just pick the first one as we enter the street.
There are three girls working there and all of then get involved in Project Cut-the-Humong. One of them is obviously an apprentice and she is very eager to learn. No matter how the hairdresser moves she find a way to pop up in front of my face to take a real close look at how the trimming is being done. It’s outright scary with that skinny little girl showing up on between the hairdresser arms while she’s wielding a scissor around my eyes to trim my eyebrows. Luckily, karma is still good to me, I get away in one piece and with a relatively decent haircut, beard trim and adjustment of the bushy eyebrows. 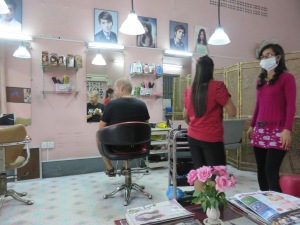 When we enter the hotel we stay in for the rest of the evening. We do fruit for dinner and just relax. We put the alarms at 5:05 so we’ll get to the airport in time. Adios Myanmar, we’re going forward, always forward, tomorrow.