I really don’t knew how to find the right words to describe this mornings adventure. The Ho Chi Minh mausoleum and museum was…
I said I really struggle with the words but I’ll try. After breakfast we took a Taxi to the mausoleum. The mausoleum was built against uncle Ho’s wishes. He wrote a will where he asked for cremation and fire good ashes to be scattered over the Virtu, south and middle of his beloved country. Quite to the opposite, the party committee decided a couple of years after hours death to build the mausoleum and put him on the lit de parade. The mausoleum itself is rated as the world’s sixth most ugly building by CNN.
The Taxi driver let us off and we entered the mausoleum grounds. This is holy ground in Vietnam and you better behave appropriately. Dress code is strictly enforced (no shorts or singlets), no loud speaking, no laughing, and when entering the mausoleum no hands in pockets, no folded arms and don’t hold back the queue.
We bought tickets and went through security. No iPads allowed inside. We could bring our phones and small cameras, but not the pads. Go figure. They had to be stored in a baggage handling system within specially designed handbags. Since we came early and it’s off season we were in the first batch to be set through.

The line for getting into the holy of the holiest

Mette and me in the walkway. There are TV’s along this walk to entertain people when the stand in line here for hours.

The guards. The more medals, the better position. This guy had no medals at all.


The whole spectacle reminds me of kindergarten kids on tour. Your asked to walk in pairs and to step up if the gap between you and the one in front of you it’s to big. There are white dressed guards every fifty meters or so. We match through the park towards the mausoleum. When at the doorstep we are once again halted and some get a reminder of the no-cap regulation. Then it’s into the holy belly of the beast. We match up the stairs and when we are to go into the display room we get separated and go into single file. The guards there are very actively managing the line and pull people forward if they lower their pace. Physically grabbing an arm and pulling people forward. I guess it’s a necessity when you have thousands of people in line outside in 35 degrees and high humidity.
Uncle Ho’s hands and face are lit up, while the rest of the room is rather dark. It’s better than I had anticipated. I had a notion it would be a coffin with a plexiglass top, but it’s bigger and grander. And then it’s over. The walk around three quarters of the “bed” took about thirty seconds. It’s said that the reaction in some of the locals are a spectacle when they get inside. I guess you can ascribe that to the aforementioned high heat and humidity in addition to the time it takes to get through the line.
On the outside we could pick up our iPads. They have transported them from the delivery point to this pickup point. We ascribe this as a way of creating jobs.
We bought tickets to visit his house and look at some of his cars. Ho Chi Minh is a character so big here in Vietnam there is no comparison in Norway. The U.S. has their founding fathers, but treat them differently. Other countries that have such a father figure it’s China and Russia as far as I know. Could the political views pay a part?
The garden, house and cars are all nice. There are people there with us in old uniform jackets and lots of medals. This is probably the real men that made up “Charlie ” that we’ve seen in all the old Vietnam movies from Hollywood. There are loads of young boys and girls in uniform guided by a Senior officer. It’s hard to know if it’s a part of the indoctrination or if it’s a day off for them.

On the bridge by the pond

The stilt house where he lived

His cars. Presents from France and Russia

The precidential palace. Not open to the public


We move through the old house and aim for the Museum. We had read up on the Museum, but it was nothing like I expected. The people behind this must have been on a high of some sort. The whole museum is one large brain fart. It’s a mix of modern art, intricate mazes, sound and video, and lots and lots of propaganda. Uncle Ho lived parts of his life in a cave while fighting the invaders from France and America. This cave is preserved as a brain with Ho Chi Minh living in it. And it’s large. Huge rather. And totally not-understandable. When we had spent some time there we were all just overwhelmed and had to get out. Phew! That was one heavy museum unlike any I have seen before.
We gather up the backpack from the storage unit and move into the street. Let’s just find a place to unwind.

The last step up to the craziness


We end at a coffee place that serves only Vietnamese coffee, and cold tea. It’s common to get served tea here when you sit down. Not hot not cold, just something lukewarm. The taste isn’t all that bad, but it’s really not drinkable in that temperature.
Onwards, my friends. There is a part of an old B-52 in a little pond somewhere around here. We go hunting for that and end up walking in some really local back streets. This is where the locals shop their chicken dinner and get their hair cut. Small narrow streets where I could almost touch both sides with my arms. Honk Honk! But that does not deter anyone from driving their scooters here.


We find the wreckage of the plane and it’s a gruesome reminder of the twelve days of bombing during Christmas in ’72. The peace talks in Paris was almost concluded, Nixon got the presidency and stayed a new offensive. Great. Mostly there where kids and women in town as they though it safe because the previous Christmases had been bomb free. The result was devastating.
We found a little surprise to a little fellow in that back street. Guess he’s gonna be more happy than the immediate family.
Next up is a visit to the botanical garden. It’s cheap to buy the tickets and it’s easy to see why when you walk around it. This is probably the least botanical informative garden ever.

Protesters outside the Botanical garden. We have no idea what the protest for/against

Out on the other side we start looking for lunch places. And there it is. Staring it’s right on the face. There’s a lot of tables with the baby chairs and we sit down. We try to order some food by waving our arms and pointing to our mouths. This resulted in a pitcher of beer and three glasses. We can live with that, but still need food. Katja and Mette goes over to the kitchen and point directly to the food. That helps.
We get an order of pork side with some fermented cabbage and salad. With a little soy sauce with chili it’s a meal for kings.
Suddenly it’s full of people there. There gotta be around fifty tables and it’s packed. We beat the rush by minutes and we seem to be the only western people here, so it looks to be a local joint. We get eating instructions from the guys at the table next to us and dig in. All around us it’s it more of a party mood than a Tuesday lunch hour. People are drinking beer and bring their own bottles of liquor. The guys next to us drink vodka, the big table behind us with business suited people pass around a bottle of whiskey. Katja goes, as usual, around to take picture of other people’s food. She is once again invited to join some of our neighbours to taste their fish, but she chickens out. Maybe next time.

Getting good at eating wth chopsticks

Crowded after at short while


After having one too many beer we go back the way we came for a coffee and a slice of pie. Now we’re just chillin in the sun and enjoy the warmth it brings. We have crossed a whole lot of the to-do-list today.

We start walking toward the centre of Hanoi again and aim for the Thai embassy to pick up our passports with our visas. It’s a nice day and we can walk in t-shirts without getting cold. I took a video of one of the street we crossed to show how it is here.

We are looking for a new folding knife since we had to drop the last one on our entry to Hong Kong. That seems to be hard to find in this city. We walked in a street that supposedly holds a lot of kitchen utensils and knifes recording to the guide book, but that street used hijacked by Jotun.


We got our passports and headed back home. My four dollar watch from Myanmar is broken already and I need a new one. We found another watch and this time I stepped up a little and got a real watch not a Chinese piece of crap. When leaving the watch store the clerk asks if he can take my picture. But of course. Katja suggests she should take one of the two of us. He eagerly agrees and stand next to me. Then I see he starts leaning forward and rises up on his toes. Guess it sucks to show it to the buddies with the real height difference. 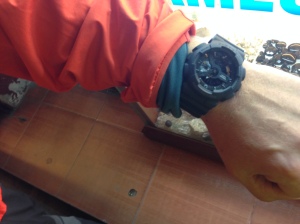 Now we just relax for a bit while getting ready to go to dinner. We will have crab for dinner today on a street food stall we passed yesterday.
We get a blog post on the air. The internet is slow in the upload and we barely got uploaded pictures for a few days.
As we head out the door of the hotel our receptionist asks us our plans for dinner. When we tell him we go for street food he almost fall over. This hotel organize tours for guests who wants to experience street food. Guess we’re not the normal clients…

We easily navigate to the crab lady from yesterday. The crabs are amazing! So big, shoo full of meat. We just love it!

Waiting for the crabs


On our way back towards the hotel we stop ata French patisserie and get Flan and a coffee. Oh my holy mother of cakes. This is turning into a fantastic day. The flan is just magnificent.

Have you ever watched a crab on the shore crawling backward in search of the Atlantic Ocean, and missing? That’s the way the mind of man operates.