After lunch at Dao two days ago we talked to Shazia and heard about her waiters dream of starting his own business and provide guided tours in Sihanoukville. We agreed to be a party of the test run.
We did a good leg workout in the gym before breakfast. Working not only the muscles, but also putting in some effort on technique on the base exercises.
We rented a similar motorbike as last time and were prepared for the police. Small amounts (2 dollars) strategically placed in pockets to avoid showing the amount of bills in the wallet.
Good thing we were prepared. Two hundred meter from the hotel we got flagged over. This time presented with a funny guy that made it all a memorable experience. The drivers license is still not valid and thereby reason for a fine. But this guy was better than the noldus last time. We now “bought” some tips on how to drive in Cambodia. “I tip you, you tip me.” A request for five dollar was met with two and we could move along. “If you get stopped by another policeman inform that you have already gotten tip from me on driving”, was the parting words from our newly found “friend”. So it might be possible to only get to pay once a day? Somehow I doubt that.
From there it went ok on the way to Dao where we meet Shazia, Theavy, Anto, and Zaki- Shazia’s brother. We’re all going on the tour, and more will meet up later.

Meetup at Dao of Life


We are six on the bikes and move to the local market. Theavy takes us through different parts of it. It’s as large market and it holds clothing, food and toys, and not to forget all the fake money. Yes, there are fake dollar bills all over the place, some I the amount of one Million dollar. It’s money that will be burnt in offerings on the Chinese New year that’s approaching. Burn money for ancestors to receive good luck and money in real life. We buy some fruits and baguettes for lunch here, that were gonna enjoy at the waterfalls, which is todays main adventure.

Anto and Shazia on the way to the market


I taste the sugar cane juice for the first time in this market. It’s just super good. Water soaked sugar canes are squeezed and the juice is served in a cup with ice. 0.25 dollar a cup. Pure sugar rush.
We move from the market and are now meeting up with Hami and JJ. Hami is a tattoo artist and had a client at ten, JJ is an Alaskan girl who spent the time since the super bowl final drinking. Right then, let’s move on. Oh, but wait. Mattheo is also coming. We drive to pick him up, and he gets on the bike with Hami and JJ. Off to the waterfalls then.

A large traffic police control. Luckily we did not get pulled over

Mattheo wonders where to sit

It all turned out Ok


We drive in a line behind Theavy and the first policeman who claimed I don’t know how to drive in Cambodia can go play with himself. We pass big trucks on the inside, ride on the shoulder of the road – where we meet oncoming traffic, and all is smooth and with no trouble. Until there is another police control.
This time it’s not aimed at tourists but everyone on a bike is pulled over. They’re looking for the sticker to prove that the road tax is paid. We all had that covered, but wouldn’t you believe we still had to bribe them to drive on? A dollar a bike. Now we’ve paid fifty percent of the bike rental in bribes. Almost smiling we push on.

Police control. This time we did get pulled over. Nothing wrong, but still had to bribe our way forward


We drive onto a dirty road and eat dust for a long while. About twenty minutes we ride on this back road and my one white singlet is rust red now. A toll station appears out of the blue and we pay another dollar for visiting the waterfall.
Finally we’re there.  We park the bikes and hike the few meters to the water. Problem is, as Hami constantly reminds us, there is no water here. He’s just about right, there is very little water here and the little that is do not invite bathing.
We end up taking lunch in a little hut telling all sorts of stories. We laugh and joke and suddenly Mattheo is back. I had not noticed him leaving, but he’s back and he’s found the waterfall. We pick up our stuff and follow.

On the dusty road

This shirt was white this morning

On the way to the water

Not much water there

Theavy in the lunch hut

That is not water…

Happy feet, which is also the name of JJ’s kayaking business back in Alaska

Mattheo leads the way to the waterfall


Katja is our designated photographer as the rest of us climb down and enter the small waterfall. It’s a lot of power in the falling water, even though it doesn’t look all that big. For the smaller girls to be able to stand they need Hami and me to support them. Hard enough for them to do that and trying to hold their bikini pants up in the water pressure.

All the way down there?

This is gonna be great

Urgh, dressing back up in the dirty clothes


It’s refreshing beyond words to shower off all the grit and dirt from the road. It’s equally bad to dress back into the dirty clothing I just stripped off.
Back to the bikes and another twenty minutes of eating more dust. On this road Theavy mannaged to get a flat tire. We move Zaki onto the bike of Anto and Shaiza. Theavya gets his bike down till the main road and here we find a repair shop. We all relax and get something to drink from the neighbouring stall while a man fixes the tire.

On our way back to the bikes

Enjoying life to the fullest


Back on the road we head to monkey road. There’s a lot of monkeys there and it’s easiest compared to Monkey forest in Ubud Bali. The monkeys are rude, eat about anything and will attack you if they think you’re hiding food.
I took out a banana and gave to one of them. I wasn’t quick enough to close the seat on the bike (there is storage space underneath) and the monkey got a hand in and ripped out more bananas.. One even took Ham’s bike hostage. It finally caved in and relented the bike to its owner. 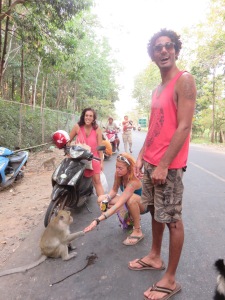 We went from there to the sunset point on the highest peek around town. Theavy called it a mountain, but that is just wrong. Coming from Norway this was more like a hump. We spent a little time there before breaking up the party and moving separate ways. Some of us will meet again tonight for Sal’s party and Hami is doing another tattoo.

Theavy and Mattheo in sunset


Once we reach the hotel, we have just over half an hour to shower and change before heading back out again. It’s enough and we get a tuk-tuk to take us to Dao where we’ll meet the rest. This tuk-tuk is in serious trouble. Seems like it’s clutch is burnt out and we hardly move. We use more than three times the time we normaly use over to Dao.
At Dao we meet Tom, Tom’s mother and his cousin Elsie. We split up on bikes and another tuk-tuk and headed for Sal’s. She has made a lot of food and it’s about to get served when we arrive. It’s a fundraiser for under-privileged kids in the NGO that Tom works for. Ten dollar for food and extra for drinks. We sit at a table with Tom and his family hearing about his work here. His cousin is just starting her five month travel and started out with two weeks volunteer work, for the same NGO.

The group that left together


We enjoy ourselves a lot and when it’s time to go a Theavy suggests a KTV night. Karaoke TV. Yeah baby! You have one of these private rooms where it’s only you and your friend who select the music and hear each other sing. It was loud, but fun. The room came with a hostess who operated the equipment and made us drink. The beer was warm and they served it with ice. Whenever one of us had taken a sip she was there to refill the glass. It’s meant to be that you pay only for the drinks, not the room. This was the information we had until the bill arrived. The discussion between Theavy and the Manager that was called in was heated and very fast. We paid our part of the bill and walked home. Luckily the hotel was just as few hundred meters from our place. We got back somewhere between 02 and 03, very unlike us. Hic!

Me pretending to sing

Katja in the red velvet sofa

Theavy arguing with the manager

Everyone agreed it was a fun night