Up at the right time this morning. Strangely how that makes everything run more smoothly. Last day for now with Bakti Negara.
We still have the motorcycle as the cost of hiring it for a day is one quarter of the Taxi cost up and down to Bakti Negara. As long as we don’t have to bribe any policemen it’s way cheaper. It also gives us a predictability on departure time.
We’re up and having breakfast when the rain starts. It is rainy season here in Indonesia and trust me, when it rains it rains. Looking out on the downpour we just hope it’ll stop by the time we are leaving. Driving a motorcycle in this weather is not happening.
Before we leave the rain is down to a mere trickle and we put on our rain jackets and head off.
Using a jacket in close to thirty degrees and a humidity to battle the saunas back home is not recommended unless the bike is moving. When we stop at red lights (it’s occasionally done here on Bali) it’s extremely hot. But riding without would mean to get soaked.
We use ten minutes more on the ride up, and in percentages that’s quite a bit. Traffic slows down in general here when the rain comes. We get to Bakti Negara with ten minutes to spare and do a little warm up.
There are pictures on the wall up in the living quarters here and we get Bagus to tell us about them. They’re mostly of his dad who’s the formal living head of the clan. We also get to meet him as he comes out from his house when he heard us talking. He has suffered a heart attack some time ago and is not allowed to train with any intensity any more. It was nice to meet him and to show him respect.
We did Pencak (form, not fighting moves) with Bagus today. Most easily compared to kata’s. First some basic movements, then we did a kata that Bagus had made. It is similar to kata in the sense that we do a fixed pattern, but different in terms of “precision”. I put that in quotes as it is equally important with efficiency and functionality, but it’s more loose in terms of foot placement. Where we’re used to millimeter precision of footwork and angles in Karate it’s more about what works for you in generating power here. Our Kali practicing readers will easily know what I’m talking about.
The form is about forty five moves and we get it to a level where we remember it, and are given a small amount of praise from Bagus.
We train for almost two and a half hour before we call it a day. Afterwards we talk about the different levels in Silat from basic through self defence, art and spirituality. We also look at weapons that we’re not familiar with, and on some games he uses when teaching kids.
The four days here have been a blast and Bagus is really a great guy and a motivating and fun instructor. We’re looking into the possibility to drive down from Ubud to do more training the week after the Peaceful Warrior camp. It was Heikki that got us connected to Bagus and Bakti Negara. A big shout out to you for that, Heikki.
We drive down to town and talk about lunch. We both want more babi guling, but try to make the other one say it first. I break down first. Babi guling it is then.
From there we go looking for sandals to me. Size 43 isn’t big by any other measure than here in Asia. No luck, but promises that the store down town has them. We go back hone, return the motorbike and relax. That is a acronym for sleeping on the couch for my part.
Katja goes to yoga while I work on the blog. We’ve had better connections to the internet than we have right now and uploading pictures takes forever,  if they don’t fail in the process. We’re once again way behind on publishing, but it’s all written, pictures are taken it’s all a matter of getting the pictures uploaded and added to the text.
I go out and meet Katja at the yoga place so wet can go for dinner. We’re doing Indian today and have twice been advised to go to this specific restaurant, Queens Tandoori. It’s under investigation on Tripadvisor for possible self promotion, but we take the chance. It’s ok food. I like mine a lot, Katja is medium satisfied. The service is good and the total add up to three out of five. Above averages, in other words.

Now we go down to the center of town and go to Lippo mall where they’re supposed to have sandals my size. They do, but it feels like walking on cardboard and whatever my old Teva’s are changed into gotta be better than this. My eleven year old sandals feels like the best Nike’s when I get them back on my feet. There are flip flops from eternity and back to be found here, but very few sandals. I’ll keep looking though. 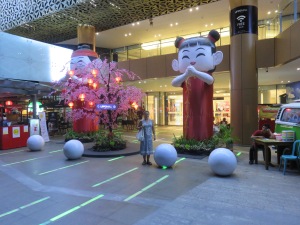 High quality decorations outside the mall

We get a taxi and drive home. It’s late by our standard and I don’t use long before I’m in La-la land.

It isn’t the mountains ahead to climb that wear you out; it’s the pebble in your shoe.