This post is meant to gather most of our does and don’ts of Indonesia. It is mostly based on our stay in Bali, but experiences from Lombok is also a part of the equation.This post will be updated as we remember more, or experience new situations.

Use the official Blue Bird Taksi. These guys run the meter if you don’t try to get a fixed price. If you want the fixed price, see the point about bargaining. The taksis are light blue with Bali Taksi on the side, and a light on the roof with a blue bird in flight on a white background.

Power outlets are based on European standard. 220v.

Bargain! In all circumstances will people give you an extremely high price for their goods or services. For a Norwegian it’s quite the opposite from home, with fixed prices anywhere – including all taxes. The cultural here is based on bargaining so counter offer below what you think is fair. Don’t hesitate to go several times down in price from what is offered. Often you will find the seller meets you fairly close to your price instead of the “divide in the middle” approach. If they ask to much, say thank you and walk away. Be prepared for a last offer if you so chooses.
There are those that claim you should not ask the price if you don’t really intend in buying, but. We found that to be a bit extreme.
Look at like a we with smiles and jests. It’s in their culture to do this, so you have to play by their rules.

Be polite. This is not an exclusive Indonesian tip, shame in you if you thought so. But you will come a long way with a smile and a no thank you when replying to sales people along the streets. It makes everyone’s days better.

ATM’s. There are lots of ATM’s around. Some of them do not accept foreign cards. So check outside for logos of Visa, MasterCard and so forth. And know that a lot of these ATM’s are small air conditioned boxes. Great for just cooling down a bit, if you don’t block it for other persons.

There is not well functioning structure with payment by credit card. It’s possible to do so in most restaurants (not the local warungs), but they add 2,5-3% to the bill. They are open about it, but for us Westerns it’s uncommon that we as end users are the ones to pay this.

Tipping is not normally done in Indonesia and Bali. Most restaurants will add 10 % tax and 10% services to your bill. Note in the menu if it says that they do or not. There are never any kind of trickery involved in this, but openly informed. Usually at the bottom of each page in the menu.

Going to see temples are a part of any visit to Bali, and other places in I Indonesia. When you park at the 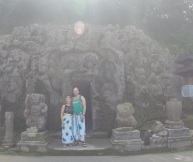 Outside the Elephant Cave

entrances of these temples you are swarmed by sales people telling you the need for dressing in sarong to enter the temple. It is true that you need to be dressed according to religious beliefs, but most (if not all) temples that charge an entrance fee will let you borrow a sarong. Or if you happen to brig your own, that’s Ok. Bare shoulders seems to be OK, ladies in theirs cycles are not.

Warungs vs. restaurants. A lot of travelers feel they have to eat at the lowest quality food stalls to be real. This may result in a Bali belly, that few would want to endure. We have tried out the BBQ pork from a couple of food stands and so far (knock on wood) have not experienced any real problem. But check out the mid level eating; the warungs. These places offer a lot of the same dishes as the restaurant, but you can get down to a 1/4 of the price. There are to main versions of these warungs: the one that makes to order (more or less) and the one who mass produce dishes all day and serve you from the stack when you order. If you choose the latter, which in some cases even will show if their food in the window, make sure there are enough locals using the same warung. This both ensures the price is right, and that there are enough circulation that the food stay fresh.

If you don’t like what ever you are served don’t eat it! Food poisoning will ruin any vacation and if you feel any funny side tastes in your food, stop eating! Don’t say it tastes funny while eating the whole plate. You can afford to buy something else. Do it!

Some of the plumbing around here is not able to handle toilet paper. Look for signs saying so, and respect them. Use the bucket next to the seat to dispose of the tissue. You might find it disgusting, but hey… A flooded toilet is even more so.

On the rocks. In earlier days it was common to make ice cubes out of the local tap water. That made for a lot of Bali Belly. It does not seem to be the case anymore. All ice that I have gotten has had no taste of chlorine or impurity.

Use sunscreen! Even though inland climate of Bali may be cloudy does not shield you from sunburn. Use sunscreen.

Renting a motorbike should cost you about 50.000 IDR a day (as of August 2014). Use the helmet offered, and fasten that chin strap.
There is a lot of corruption among the police officers and if you get pulled over it’s mostly about cash. Make sure you wear your helmet (it’s the law) and make sure you know where the licenses paper are for the bike. Demand to see it upon renting. It can save you a lot of money later down the road.

They drive on the left side. For a European, excluding our British citizens, that’s just stupid. But they are still doing it, mostly. Don’t be surprised to find a motorbike driving in the wrong side of the road. The traffic here flows because everyone is giving more than they take. Be that way, don’t stand on your rights, but go with the flow. There are thousands of traffic deaths each year in Bali alone. Enough to read that last part again.

The portions served here are rather small for a big guy like me. It’s like a cereal box contains 50 servings, if you are to believe the writing on the back. There have been times where I have needed to order a second dish to be satisfied.

If you book a room at a hotel, but find the room not to your liking, ask for a switch. Remember the point about being polite? Ask nicely, and see what happens. Experiences so far show that room on the second floor smell less of fungus and mold, than the one on ground level.

Mosquitoes are not at big problem, but if you really don’t like ’em, try to get a room as high up as possible. They don’t fly higher than somewhere between 2-3 floor.