Yup, it’s that time of year again. When all your Facebook friends write on your wall, and you’re supposed to say stuff like “It’s not the numbers, it’s how you feel”. Welcome to my birthday.

As we are turning older, I think it was originally meant that we were supposed to be wiser as well. Somewhere along the line a lot of people seem to be skipping that part. As it easy to see the splinter in someone else’s eye, but not the plank in your own… I will let others be my judges on that part. 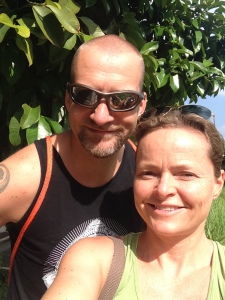 On the way to yoga training

But we were really here for my birthday now, weren’t we? Life is good when the only hard decisions you have to make during the day are where to eat and when to sleep. So I can safely say I have had a great day. We got in a class of Yoga wit Les Leventhal today. He is an amazing teacher and have a history that could scare most people. We bought his book today (as we have done with most teachers we have trained with over the years) and it’s called: “Two lifestyles, one lifetime”. I will not say all there is to say about his history but drugs, porn acting and alcohol are three components that never will do you any good. Even worse if you mix ’em, I guess. From there he has transitioned to be a big authority in the yoga community, and he has been a great add-on here at Yoga Barn. He will teach here until September 16th and we are plotting in as many hours with him as possible. 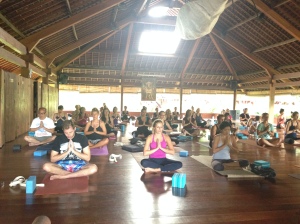 One of the classes

I wrote some pretty stereotyping stuff about typical yoga people in an earlier post. After being here and training for close to three weeks, I can confirm most of it. But even though there are a certain ways to dress, eat grass – not meat, coconut water is better that water etc., all of the people we meet here are friendly and helpful. There are a lot of different nationalities here as well. The Germans are as nice as the Australians, and the Italian guy is nice.  So even though I still don’t really fit in in all aspects – I’m having a great time here.

View from the yoga hall

Ahhh, yes – the birthday! After lunch we went to a bakery / cake sale. For some reason this place is only visited by Japanese people, and Katja and me. Today was the second time we were in there, only Japanese customers besides us. I have no idea why that is, but their cakes was delicious and the prices fair. Some pool time after that, episode 9 of Vikings Season 2 – dinner at the Taco place, and now here writing up today’s summary.

Relaxing in the pool

Relaxing by the pool

Before I went on this trip I said that I might get the normal “nervous ticks” at the end of a normal holiday period. Say, after 3-4 weeks when it would be normal to go back to work, I would get some kind of awakening that we are to move on to greener pastures. But hey, I can honestly say that I have not thought about work or much of the stuff back home for ages. I have not kept up with work mail, and let the password expire. Yes, Runar, you told me how to fix that, but I chose not to do it. 🙂 I try to keep up with Norwegian news along the way, but from here it seems the Norwegian community are still wallowing in shallow problems, squirting water at one another and trying to make it look like a storm.

The end of another birthday is almost upon me. Tomorrow we will do a 3 hour workshop on “Arm Balance and Inversions”. I’ll explain after I’ve done it. Still not sure what I signed up for.

Be nice, give a smile and make someone else happy today.