Emily. What a sweet and innocent name, and when you look like the nice teacher I had in second grade I’m all yours.
Little did I know what awaited.

Power yoga with Emily got to be the hardest class yet. I don’t know if it was the deceiving looks that made the difference, or if I’m tired from all the other classes or just that she’s just that good. I vote for the last part, myself. Anyway… I’m beat, dehydrated, sore in the wrists, happy and content. Let the day begin.

After the practice we enjoyed a double breakfast/lunch order at the hotel. Which got a bit complicated for the staff at the restaurant. We have breakfast included, and it it goes on to 11. When we practice at 9 we have wheetbix and granola in the room, before we are back just before 11 to make lunch out of our included breakfast. Very clever, we think. But one Indonesian breakfast is not enough to fuel Humongen towards dinner time. But with smile and charm I got the lady to bring me the lunch menu to order a second dish. Now I’m pretty filled up, topped with nice Balinese kopi with milk, a fresh pressed orange juice and some fresh fruits. 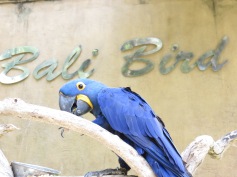 We rented a motorbike and set out to to Bali Bird park. We had read good things about the park, but were still pleasantly surprised. A lot of the buildings here in Bali are quite shabby, both by use and age. The park was very nice in every way. Clean, fresh, and SURPRISE! A lot of birds. They claim to have 1000 birds of 250 different species. It’s well organized with a walking path that will take you through most of the displays, but they also put on several shows during the day. We got to witness two of them: Basic Instinct and Bali Rainforest.
The Basic Instinct show features owls, hawks, parrots and eagles. Low flying over the audience, capturing food thrown in the air, eating food of the top a woman’s head… It was great. 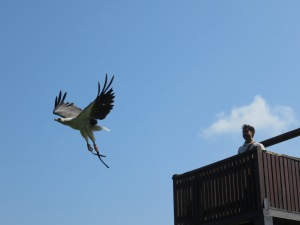 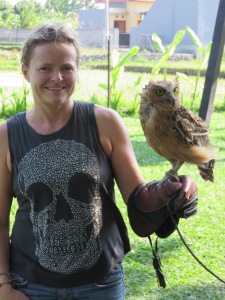 The Bali Rainforest show featured som local birds, geese and Katja! While we sat and watched the show a lady approached Katja and asked if she would be a “helper”, dressed in local costume, and of course she would!!! At the very end if the show Katja appears as a farm lady feeding the geese. A part that seems to fall natural for her, as the pictures prove. If we get a lot of comments on this post, there will be a showing of the previously unseen footage from this event. 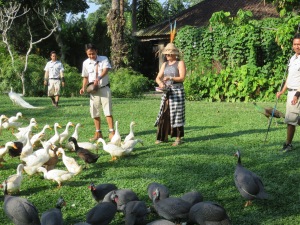 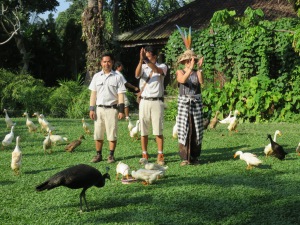 Like a royalty waving to the crowd after the show

When we finished up in the bird park after about two hours we were reminded that the ticket also gave access to the Reptile park right next door. We quickly debated wether to go in or just get dinner. Luckily we went inside.
Neither of us are particular fans of reptiles, and seeing pythons and venomous snakes made it crawl down both our spines. After a few meters of glass cases with a diversity of reptiles did we go into a building built into a rock. It was kind if creepy, but hey! Reptiles are creepy, right? 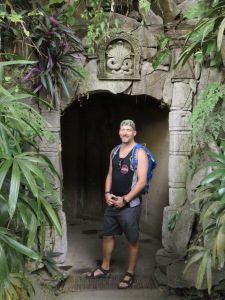 The first few cases were just your normal garden variety of geckos, frogs and snakes. But then!!!
We turned around a corner and saw a chicken in the cage, with an albino python. What the ….! 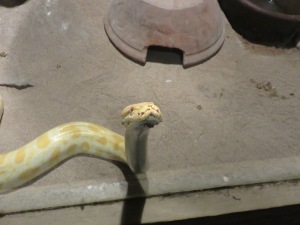 Albino Python. One of the worlds largest snakes. This one is 2 meters

First we thought the chicken to be a fake, but then it moved, and so did the snake. We witnessed a blind albino python feeding! A keeper came round as some of the women (there were another family of three there for a period) screamed every time the snake attacked. We stood watching for some time, but decided to move on. After turning the next corner we heard a sound and went back. It was not from the snake cage, but an aggressive gecko next door. But now the chicken looked a bit “out of the game”. It tried to fight back the snake a couple of times, and really got him on the nose a few times. I picked up the camera and started filming and Voila! 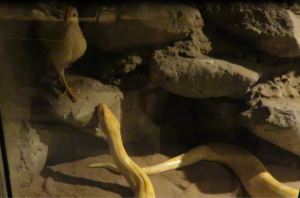 The snake attacks, catches and strangles the chicken. You can hear Katja’s reaction to that quite clearly on the video. 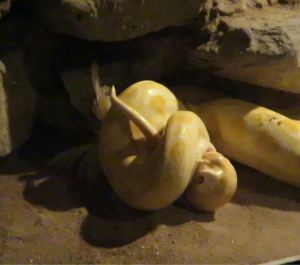 Then it was eating time. 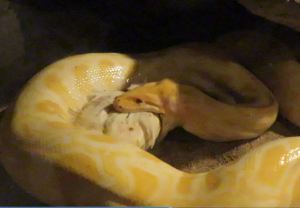 (These are screenshots of the PC from the Video)

Having seen good old Sir Attenborough showing this on tv is quite different than standing 20 cm from the snake. It was amazing! To see how it unhinged the jaw and started to bite over the chicken. And mind you, if you think of this as a the size of an Easter chicken to place on the fireplace you are sorely mistaken. This is the chicken size I had for dinner last night. It should not be possible, but with the use of it’s body it squeeze and maneuver both body and mouth and pushes the whole thing in. Feather, legs, feet and all. At the end of the video it is clear the albino snake has some acting skills. By raising it’s head to the camera as the last little chicken feet goes into the dark hole. The end! At least for the chicken. I’ll see if we can upload the film to YouTube, but it is a total of 13 minutes and might be to large for us to upload from here.

From this moment we decided not to have chicken for dinner…

Exiting from theis crypt of utter creepiness we met a nice non English speaking man. He took us to a locked area and presented us for the iguanas. “Hold? Yes? ” how could we say no? Me first. 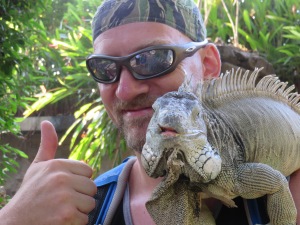 Humongen & Iguana (Iguana to the right)

The texture was not what I expected. It was warm and dry skinned. A little rough, of course, but actually a bit cuddly as well. When Katja did her turn, she was a bit nervous, you might say. The man dried her palms a couple of times before he placed the Iguana there. As the picture is taken the reptile just started to look at Katja like food, and a second later she exclaimed:”he’s turning towards me!” The man picked him up and let him gently down to the ground. No dinner for him just yet. 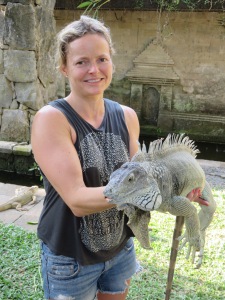 Yummy, dinner to the left

From there he took us over to the turtles. Katja was taken into the pond to them and was asked to sit on the big one. 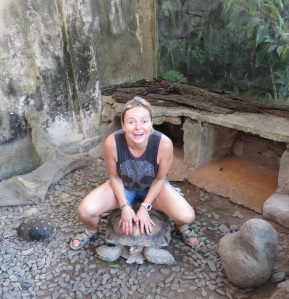 I just picked him up. 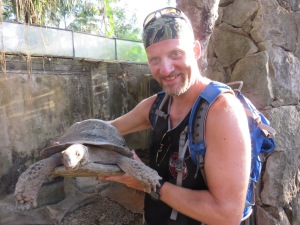 After this we got a personal guide for the rest of the area. He showed us where the snakes hid in the different glass cages, and guided us all the way to the end. We exited with big smiles on our faces and can highly recommend these two parks.
On the way down we had spotted a place that made Babi Guling (suckling pig, remember?) and we plotted a course there. We found it and had two portions each. It was the best Babi Guling so far, and a lot cheaper than the ones inside of Ubud. Here is a picture of the place, and their card. Ten minutes outside of Ubud, due south. 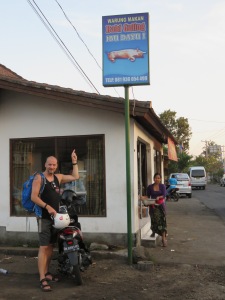 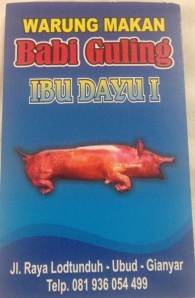 After taking a coffee at Anomali, picking up the clothes from the laundry, shopping milk, nuts and water we are back at the hotel. Now it’s time for sorting the pictures, selecting the few for the blog, writing this text and publishing. Tomorrow awaits a new day with Acro yoga, with “old” and new friends.

“You can do the advanced pose, the normal one, or just watch. There is learning in watching also.” – Emily