And so it has arrived. Our last day in Ubud, and the start of preparation for our next chapter in the adventure book.

We did Power yoga with Bex this morning to get a good and heavy start of the day. Then we followed up with another class of Yin yoga. That’s three hours of yoga for ‘ya, right there. And then I was empty like a worn out sock. You know the one that comes alone out of the washing machine? Even though you can swear you put it in as a part of a pair? That wet, drippy, soaked, unformed entity; that is what I feel like. We’ve just had lunch after the training and spent an hour by the pool. Katja is insatiable for Yoga and packed up and went to another class now at 16:00. The last class was not to be missed. Me? nah, I’m still by the pool when writing this. Debating internally wether to go to the room and AC or stay here in the heat a while longer. Might just end with another dip in the pool though.

Later on we’re meeting Alpina for dinner. Out of shear coincidence we ended up having lunch with her as well. We just picked the same restaurant. A nice surprise.

The dinner was at warung Dewa. We’ve been here a couple of times before, as it is a cheap place with good food. Alpina was there when we arrived and we had a great dinner. The place is organized with three large tables with benches. If it is available space you sit and order. To order you have to write your own order on the order pad. They just put the menus and the pads on the table. This is to make sure that the old lady that waits the tables don’t confuse your order, as she speaks no English.
At our table we met Julie and Per. They live in Hong Kong and we got some nice insider tips to the city. A very nice and friendly couple that willingly shared their travels. They had been around a bit and already visited several of the places we are going.
We also met a couple of nice Spanish guys traveling around in Asia. It’s nice to see people from the south of Europe getting out from under the financial crises and start traveling again.
Warung Dewa is packed with people, but we highly recommend it. Even more after the new acquaintances we made last night. We ended the dinner with an introduction of The Frozen Yogi and Alpina. You welcome. 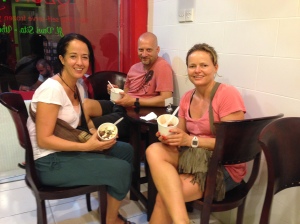 The evening ended with packing. As we are rather light travelers it doesn’t take to long to pack, but it’s a hassle anyway.
Now it’s just a matter of a few hours of sleep before we get picked up at the hotel for our travel to Nusa Lembongan.