After a lazy morning (except for Katja waking early and doing an hour of yoga on the beach) we took the bike in to town in search of the post office. Another mission impossible?

We heard from the woodcarver yesterday that there was a post office in town. So we set out for a search. It shouldn’t be to hard since the town
is two streets and the island is inhabited on maybe three football fields in total. But what to do when everyone just stares blankly at you when you ask about the post office? 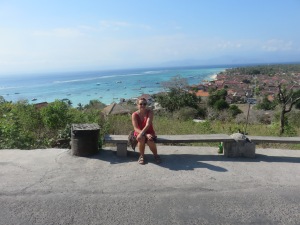 There are post offices on Bali of course, where we will spend Sunday and Monday morning. But we think they will be closed on Sunday and it would be nice not to handle it on Monday with check out and transport to the airport.
Turns out, after riding around town and asking a lot of people, that there are no post office on this island. At least we know that and have to plan accordingly for our last day on Bali.
We are (grazed) lunch on the Eco deli, but that was not enough to satisfy Humongen. We therefor ended on a French crepes places. It was nice but expensive. Imported French ham and cheese and served in a rather fancy place makes for high prices. But it was gooooood. Oh, and while we were there Katja found out that her phone was missing. I jumped the bike and drove back to the Eco deli. On the way back a Japanese guy steps into the road (sidesteps about a meter), and I was very very close to run him over. If Katja had been on I would not have had the maneuverability to avoid the stupid man. But my grunts as I passed him and the way he jumped back towards the side of the road made me think he maybe won’t do that again.
The phone was not missing at all. And it’s the second time in as many days Katja pulls this stunt. Is she hiding something?
We went back to the hotel, slept, took a dip in the pool, borrowed a canoe and almost started fighting about how to paddle, had dinner at the same table with the same neighbors, packed and slept.

That’s no way to hold a paddle!

No, this side, NO THIS Side

Friends at the end


Tomorrow brings another day on the road, this time back to Bali for the last night in Indonesia.

it’s so hard to leave – until you leave. And then it’s the easiest goddamned thing in the world

Born in Oslo, 17.november 1969. Happily married to my wonderful husband Arne Bergersen. We live in a nice little townhouse at Holmlia, just on the outskirts of Oslo.