And we’re here! Down under. In the land of the Kangaroo’s and Dingo’s. Where “just around the corner” means a couple of hour drive. Where they measure weight in kilos and length in feet and inches. Welcome to Australia.

We came in at 19:30 to Perth airport last night (today’s Tuesday) and everything went smoothly out of Bali. I had no big expectations for how it would be handled on the airport, with the take off etc. but it all went smoothly. There were hardly any lines for check in, baggage drop, security or immigration. It all just was one big swoop. And I’m happy with that as my belly was in constant uproar. I had one small bowl of corn flakes, fruits and yogurt all day. Not much to feed a man my size. Anything I took in came out … well, you don’t wanna know the details.

Before you land in Australia you have to fill out a custom declaration form. There are a couple of questions there that we could not tick off right away and we approached one of the official. We were routed to an area for inspection and had a talk with a nice lady. We had two issues: We had been at a farm (during cooking class) in the last 30 days, and we brought a knife (the one we use for cutting fruit etc.). The only thing that turned out to be an issue was the knife. It’s a folded blade and the nice lady called over the not so nice lady. The latter was very skeptic because we actually had X’ed out “NO” on the form if brought any weapons (including knives). We’ve talked about letting it stay un-ticked, but had done it anyway. We tried to tell her that we had voluntarily showed it, but she was constantly gnawing on the fact that we ticked the box wrong:”It’s a knife! It says knife here!” and further with:”You can open it with one hand, you can flip it open”.  Then the knife was inspected by 4 more persons. We talked among ourselves in Norwegian:”Why can’t they just confiscate it and let us go…”, but then the 5 guy came back and handed us the knife with a:”That’s all right. Have a good evening!” The not so nice lady was quite visibly upset and borderline angry for loosing a bust. She was still talking about it while we turned around with a “Have a nice evening”, and got out of there. Our host Mike have no idea how that knife got through customs, but I guess you get further with a knife and a smile that just a knife.

Mike was there to pick us up and we drove to his house. We met his house mate Damien, and his dog Jack. 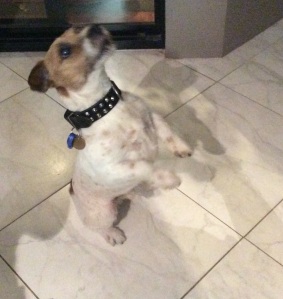 We were talking for a short while, then crashing to bed.

More to happen in the morning.