After a late night we aimed for a slow morning. We woke up at seven and went outside just before eight. The feeling of once again to wear shorts to breakfast is great.
The breakfast was way better than expected. And here comes a little shout out to my dear sister: We got served pineapple jam. There is nothing in this world more similar to the Apple jam (eplemos) from our youth. Taste, flavor, and colour. It was a magic moment.
The waiter spoke pretty good English and we used him as a little resource for planing out the day.
We spent some time by the pool while reading up on Angkor Wat and the surroundings. The temple complexes here are huge and we have a lot of ground to cover during the coming days.

The hotel and pool


We got a new room and got to move one floor up. That’s nice, even though it looks like it’s gonna be for just one night. We’re surfing booking.com and Agoda and find better hotels to lower cost. We’ll go by one later to check it out. If it’s as good as it seems we’ll change.
We walk to city center and look around. It’s a twenty minutes walk in the heat, but we take it slow and chat while strolling along. We’re planning on renting bikes, but change it to a motorbike to cover more grounds today. To and from hotels on different sides of the city makes it a good idea.
We finally find an ATM that works and gives us US dollars. Yes, everything is priced in dollars and with a foreign card the ATM’s will only give you dollars. Sucks for us as the krone vs dollar is more than ten percent in our disfavor since we left home. Fix it, you stupid politicians!
The supermarket in town leaves nothing to be desired. It’s packed with goods from far, and a little from near. This shop would have done great in Oslo. I did not expect to find that here.
Getting a motorbike seems harder though. We search around and ask a lot of locals, but to no avail. Seems they aretrying to protect the tuk-tuk industry. We end up getting lunch and something to drink while recharging the batteries.

Beautiful flower in the market next to the hotel

Fresh water snail are sold everywhere and are very populare

Flexing in the royal garden


Back on our feet we get a SIM card for my phone so we’re online and Google “renting motorcycle in Siem Reap”. The hits gives us a course and walking along we come across a backpack salesman with a motorcycle for rent. We haggle a bit on the price and booked it for two days. “Japanese quality. Not crap from China!” Ok, good to know.
The bike is almost as big as a gold wing, and it’s not as nimble as the bikes we drove on Bali . Gonna change it after the two days.
Since passports are the only accepted identification here he holds Katja as hostage while I drive to the hotel to pick it up. Katja gets a lesson in the country’s history while I get to know the bike before I get a passenger. My passport is left at the backpack store. I’m getting increasingly trusting to these kinds of things. Leaving home I would not dream of such a thing. I guess traveling and meeting different people do more with me than I first thought.


We move to the hotel we’re to check out and find a nice place. A little bargaining and we get the same price as via booking.com and that’s more than forty percent discount. It’s better, bigger, has a larger pool and is 10 dollars cheaper a night than the one we have. Moving there tomorrow and the new hotel will pick up our bags from the first one. The service level where labor is cheap is unprecedented.
Next up we drove to get tickets to the temple area. That turned out to be more of an itsy than we thought. We were thinking of doing three days within a week, but then we had to wait for forty minutes before it could be done. They open again at five in the morning, so we’ll do it before sunrise tomorrow instead.
The highlight of the day was the National Museum. This gotta be the best museum we’ve ever visited. This country has built a lot in the last two decades and where other countries have old buildings or infrastructure to take under consideration the Khmer’s just built new and beautiful solutions. A little flashback to yesterday and immigration. They have fingerprint scanners and cameras there. State of the art. As they opened up their borders quite recently the equipment needed for handling the tourism is good.
Back to the museum… It’s a beautiful place with several large exhibitions, each over separate rooms. The first with “1000 Buddha’s ” just blew us away. Everything from the lightning to the interior, the low music, the sculptures and the positioning. Just awesome! They also provide the audio guide solution that topped it off . We spent 2,5 hours there and I would recommend to make available about four hours for a visit. We “ran” through the last two sections to get out before they closed. It’s also recommended to go there before going to the temples. Getting a history lesson and seeing how they moved from Hinduism to Buddhism is gonna make it even more interesting at the temples tomorrow. 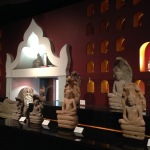 Inside the magical Buddha room

Having fun at the museum


We ended a perfect day with a perfect dinner at Mahob restaurant. It’s the same owners as this hotel and it’s just around the corner. Literally. They serve beef, which we haven’t had in some time, a lot cheaper than in the Philippines and in Vietnam. We got served a raw piece of meat (tenderloin for me, rib eye for Katja) on hot stones. Like four hundred degrees hot stones. So the meat fries on the table and you can make your own choice of how well done you’ll have it. Or do like me and eat it from raw ’til you’re done – whatever that’s called. The beef was so tender it melted on the tongue. It may be the best beef we’ve ever had. 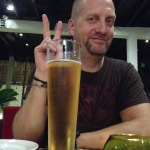 The best steak EVER

Katja had cocnut & chilli and pepper & lime icecream for dessert

I settled for chocolate cake and vanilla icecream


Now I’m laying stuffed and happy in bed while writing the text for today and slowly getting ready for sleep. Sunrise tomorrow means departure from the hotel at about 5:30. The forecast for tomorrow is thirty degrees and sunny all day.

Follow your gut instinct – your heart, it will guide you.