Right before sunrise we get dressed and put on our running shoes. Intervals on the beach then some Kali stick work. A fantastic start of the day.
We worked on the DAS disarm and the KSI Single stick matrix. Both are great sets of combinations of attacks and disarms to drill a lot of stuff. Once again we seem to be entertaining the locals that look at what we do. Some even provide us with sound effects.

No-one at the beach?


After breakfast we spend time by the pool. It’s just great to lay there listen to a audio book or reading. Katja is reading a French book to improve on her French skills, I’m deep in a story about a witch on my kindle, and another story of a anti-hero policeman on an audio book. Gotta keep a broad horizon. 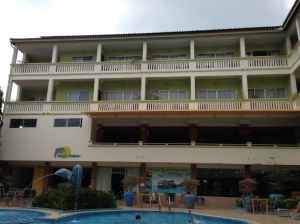 Our hotel and pool

We get lunch on the way to the beach. It’s plenty of restaurants here. They’re packed so tight they come in layers. They operate on the same price level, so it’s more a matter of how the restaurant feel and how many others are there already. More people tend to say something about both service and food quality.

On the way to lunch


Now we dipped our toes in the sand and lay on sunbeds at Angkor bar. Buy something, use sunbed free. One shake each for a dollar fifty and free sunbed rest of the day. We stayed for a while until it was time for another training session The hotel has an outstanding gym. I mean like a small gym back on Norway. Yay! We make a plan and do a leg day in the gym. It’s hard. Like really really hard. Why did I think this was a good idea again?

Before going to the gym we received a note from Thao. We met her and her boyfriend the day we arrived and came in contact with them because she was carrying a yoga mat. She have found a place to do yoga and was nice enough to give us notice. In the same note she told us where they’ll be later tonight and if would like to join them.
We walked down to the beach and found Cloud 9. They served excellent grilled fish for dinner. Just as we finished dinner Hector from Spain and Thao from Vietnam arrived. We spent a couple of hours with them having a few beers, smoking the cigar from Myanmar (one for me and one for Hector) and talking about traveling. It was nice to get to know them and here their stories. Back home in Norway we weren’t hit as hard in the economic downturn as the central European countries like Spain. Hearing the stories from Hector makes it easy to see why he travels and work where work can be found. As a chef he gets jobs, but contracts isn’t that much used around here. Hopefully they’ll have a

Hector, Thao and me

Dao of Life commercial on one of the tuk tuks. Vegan ice cream

nice landing where they’re going next.

With one beer to many in each leg we walked back home and called it a night.