I woke from a nightmare around three thirty in the morning with chest heaving. I had just knocked a burglar unconscious. From then on it was hard to get any decent sleep. Can’t really remember when I had nightmare last.
This made for an extremely early start on the day. Katja woke as well and we tossed and turned for a while until the alarm went off. I was afraid the monks in the neighbouring monastery would start chanting ungodly early, but we did not hear anything from then at all.
Up, shower, eat baguette, pack and get ready for pickup. Since we travel light now, we’re done in no time and I get to spend a few moments on the blog. Internet in Laos is crappy at best, so we stride with uploading pictures, and we’re now way behind on the dates again.
The pickup is on time and we’re once again positively surprised that we have gotten onboard all our transportation so far on the tour. Seem like we’ll make it today as well. We make another stop on the way to pickup a man heading for the airport. He’s heading to Vietnam, as Tet (Vietnamese New year) is right around the corner. We get dropped off at the bus station and told to go to counter number 4.
We do as told and our tickets get reprinted to boarding tickets. We get to keep our seats, and we’re happy for that. There’s a few other tourists in the bus, five of us in total.

In a morning tuk-tuk to the bus station

Sayaboury can be written in many ways


We make one stop on the tour over. The co-pilot shouts something in Laotian and everyone scrambles to get out. Toilet break. In the woods. In the middle of nowhere. Men and women alike move into the woods to find privacy enough to do private business. Back in the bus, off we go.
Upon arrival in Sayaboury, that we now have at least four different spelling for, there is one tuk-tuk driver that speaks English. He organizes the three large tuk-tuk’s there and get people on board and get us to pay. Then we drive into town until the police have closed if the main street. “Walk from here”, he says. We do, and in the second place we try we get a room. Leo, the German we’re walking together with wants to find something cheaper and heads out again. We’re happy to have found a room and on the third floor as well. Less mosquitos the higher you get, you know. So we’re happy.

Into town in another tuk-tuk


We just turn around in the room and head out. We’re here to see the elephants. As we cross over the bridge to the festival area we spot the first elephant, but why is everybody walking the opposite direction? We ask several people if they know of any program for the festival, but everyone is as lost as us.
We move into the festival area and it’s as lot of elephants here. Wheeee! We find the place where you can book rides and get to ride number 33. My attempts to get the driver talking isn’t working, but it’s a she and she’s absolutely gorgeous. We get a little ride around the area and she stopped to eat a little and to pickup palm trees to eat. It’s a short walk, but it’s enough.

Touristy as it might be, we got our picture taken on the elephant back. Wet bought it for three dollars and will send it back home. It might not make it up on the wall, but it’s a nice memory.
We walked the grounds of the festival and saw elephants all around. Suddenly it’s one behind you, or to your left, and for us not used to them it’s quite scary, big as they are. Then number 33 shows up again and our forever driver asks me to pet her. I do, and it’s great. Rough skin with hairs in between. Still, she’s absolutely gorgeous and I would like to hug her, but honestly I’m a bit afraid of the big animal.

On our way to the festival area

The rider of number 33

Broken bridge, but hey… we can still cross

It’s coming tight towards you, Katja 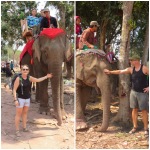 How to eat a big tree

Break it up and eat the piceces

This “little” fella peed for what must have been a full minute with the force of a fire hose.

Do I dare pet it?

Chaos at the broken bridge


We see a lot of funny things, and step carefully on the ground to avoid stepping in elephant poo. Then we see a male dropping first number one, then number two. The amount of urine coming from that big fella is unbelievable. Funny how he spreads his legs as not to get splashed. Sounds familiar, guys?
We walk to the river and watch them bath. They go in with the driver and totally submerge themselves in the water. I figure it’s more about the refreshment than cleaning.
Suddenly Katja spots a guy with a badge. Maybe he knows something. She runs over and it turns out his a German couples guide. He tells us it’s a program from eight in the morning too eleven. After that it’s like now, with riding and bathing. We have to get up early tomorrow to get a good seat at the stadium then.
It’s time for lunch and we find a noodle soup place in town. The food it’s great and the crispy pork we get served with the soup makes us wanna come back for dinner.

Lunch at the noodle soup place

nom nom nom. Same soup but someone really likes to chilli up the soup

Is it, is it really?


Not much happening now. The town is so small it had no street names. We go back to the hotel and relax. I fall asleep and recover some of last night’s sleep.
We head out for dinner and find it’s Valentine’s day. Wouldn’t you know. I’m here with mine, and we go sit by the river having a beer watching the bathing elephants. Suddenly we see “our” elephant coming down to take a dip in the river. Still gorgeous.
We get dinner at the same place we had lunch and enjoyed a different noodle soup but the same crispy pork. This time I try with the chili paste that we get on the table. Should not have done that. Katja is eating with a red smear on top of her food, and claims it pretty strong. I touch the tip of a spoon in my food and are gasping for air at the first bite. Holy crap this was strong. Fire breathing dragon strong. Puh!
I slowly understand that the chili it’s floating on top of the soup and a little stirring before each spoonful makes it more bearable. From then on out it’s better. The prices here are a lot cheaper than in Luang Prabang or Vang Vieng. A meal for two with a couple of beers is the same as a main course the other places.
We head back to the hotel with a internet that makes me wish for my old 9600 baud modem. We’ll get up early and go to the stadium tomorrow morning, don’t need that much entertainment tonight anyway.

Beerlao in sunset with elephant festival in the background

We admire elephants in part because they demonstrate what we consider the finest human traits: empathy, self-awareness, and social intelligence. But the way we treat them puts on display the very worst of human behavior.