Another day in elephant land. Laos is the “Land of a million elephants”, today we’ll get to see some of them.
We get up and out of the hotel. We bring our bags so we can go directly to the bus station when the program ends today. We walk the streets and find a soup kitchen that’s open and where we can get breakfast. It’s a very popular place. It’s a line of people there for take out. Soup take out are done in small plastic bags around here. It seems to work quite well. The food is delicious, but it’s still odd to eat garlic for breakfast.

Monks doing the morning rounds to get food


From there we crossed the river on the bridge that has been repaired since last night.
Over at the festival area both people and animals are stirring, but there is really nothing to indicate that there will start anything formal in thirty minutes. We walk around and look at the grand and amazing elephants. We conclude that it’s not possible to leave here with too many pictures of elephants.

The bridge is repaired

Crossing the bridge at sunrise


We slowly make our way to the stadium where the procession is to be held. It’s 7:58 and we ask a few men who look like officials. With a few words of English between them and some sign language they confirm it starts at 08:00. Right, that’s in two minutes. We’re more than welcome to sit on the spectator seat at the stadium to watch. When I write this it’s 9:00 and we’ve been here for an hour. We can see the elephants on the festival area from here, but nothing looks like it’s organized enough to make anyone walk in a straight line. The speakers are now in place and they play music so loud I had to put a wad of toilet paper in my ear that’s toward the speakers. Maybe something is finally happening?

Katja getting bored, making her own elephant parade 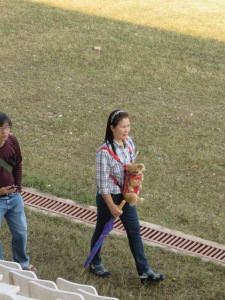 Slowly people are coming in. But with the dog on the belly? Only in Asia, I guess

A bit later a official comes over to Katja, he wants to know how to spell “Elephant”. He tells us it will start at ten thirty. Two and a half hour after we arrived. But it doesn’t, it starts ten twenty. But it was all worth the wait.
Seeing sixty five elephants parading in front of us was just enormous. Some huge, some middle sized and some small, all beautiful and gracious. Four where taken in front of the VIP stand and did tricks. One of the smaller used a hula hoop on its trunk while stomping one leg. We still believe that the giant, number twenty one, was Elephant of the year 2015. Since everything is in Laotian it’s hard to follow what’s happening.
All the elephants and their drivers, mahouts, gets flowers from the VIP section. Then the elephants can go over to the buffet and dig in. Several huge tables are set up with treats for the elephants, and they dig in.
We stream out of the stadium with the rest of the people and walk towards the center. The formal part is over in about an hour. Long ride, short performance.

Finally the parade is starting

A bit disorganized, but still awesom

Elephant parade, some small, some large

These were picked out and presented to the VIP section.

And the crowd went wild.

What’s any parade without the seller of balloons?

Petting on of the smaller ones

Dressed up for party

Katja and Nr. 21 in the background. The one we think was elected “Elephant of the year 2015”


We grab more noodle soup for lunch as there are limited choices here in town. Four consecutive meals of noodle soup is enough. We agree to do something completely different for dinner.


We stop a tuk-tuk and think he’s heading to the bus station. We get in, drive on and suddenly we see the German Leo. We stop the tuk-tuk and pick up him and the people he walks with. A full tuk-tuk heads to the bus station.
At the station it’s chaos. No English means confusion in bus, tickets, departure time and more. Between a German, a Norwegian, a Swiss and a couple of Spanish we agree on which bus goes where, but not really when.
The first bus leaving is full so we get on board the next. We spend an hour and a half in it before departure, and the last hour is used to check tickets and seat numbers. It’s mayhem. People are trying to sneak a seat that’s not their, Chinese people not speaking a word of English, and long people like me placed in seats with leg room suitable for a toddler. We have gotten seats on the opposite sides of the aisle, but get to change with a French guy. Our seats are also over the back wheel, so Katja sits without being able to stretch her legs for the duration of the journey. The aisle is filled with people on plastic stools. No “seat” is left unused. 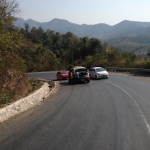 OK, so where do our bus fit in to this picure?


The bus is as old as Woodstock and the gears are not synchronized. In one of the first hills the driver shifts without luck and we end up in first gear up a hill of, I guess, five kilometers. At this point we could’ve walked up faster. This did not look good. Luckily he drove like had stolen both the bus and fuel whenever it was flat our downhill. Shear luck kept all the people on motorbikes that we passed alive. I do not give that credit to the driver.
We did a toilet stop after one hour and a fears we would do this hourly. But no, we drove from then to we dropped people off. A total of three hours and we were back at Luang Prabang. People sighed with relief when they could straighten their legs and get out.
We get into a tuk-tuk with one too many, and the one has to ride up front with the driver. Having halfway outside I feel lucky to just have to sit on the spare tire in the back.
At the guesthouse we find they’re full. Damn. We get to use their Wi-Fi and surf and find another in the center of town. The town is small and the walk over is easy, but they’re full also. Luckily it’s a decent owner and he organize and pay for a room at another guesthouse down the street. Unfortunately they only have vacancy tonight so we’ll have to move again tomorrow.
For dinner we try a cheeseburger, but are utterly disappointed by the size. It’s the size of a quarter. And I mean the coin, not the quarter pounder you all probably know. I need more food than that and have a banana pancake out in the streets.
We go to a little French wine bar. We get a cheese platter and Katja gets some wine. I on the other hand find they have a decent selection of whiskey. I treat myself to a Macallan Makers Edition. “With ice?” the waiter asks. I prefer mine room temped and decline. Nom nom nom. 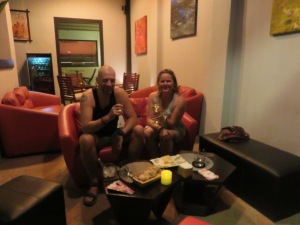 Enjoying a glass of wine, some cheese and a wiskhey

We enjoy ourselves and relax for a while. A little elegance and a piece of civilization.
We head back through the streets of Luang Prabang and enter our little room. A long day is at its end and sleep well come easy tonight.