The morning is laidback and easy. And we don’t really do all that much until it’s pickup time, just before two o’clock. We do lunch before we leave at a noodle soup lady down the street from our guesthouse. She’s been smiling and asking if we want soup every time we’ve gone past her shop. We take one today, and it’s really good. Turns out she’s Vietnamese and serves traditional Pho (Noodle soup).

We get picked up by two motorcycles and driven off to separate locations. Katja is going to weave today. She is taken to the private home of a weaver that’s just over thirty and have been weaving since the age of nine. She’s not married yet, which we believe is late around here.


The lady is shorter than Katja and the weave is set to her size. That makes it hard for Katja to do the footwork. At least that’s the excuse for being slow. I don’t I know much about weaving, even though that might surprise you, but I do know it’s a lot of footwork. They agreed upon a scarf and a simple design in the colors of green and burgundy. Since the weaving will be done with cotton Katja got to try the spindle. The lady has made a homemade solution based on a old bicycle wheel. This was operated by hand and was a nice touch.
Katja managed to tear the thread a couple of times and while moving the pattern stick she fumbled and lost it. That makes for some fuzz as there is a lot of counting and restructuring to be done.
There are several persons just walking around, and the mother (also a weaver) came around inspecting a few times. At the end the lady needed to do more and more of the work to get it done in time. We’re leaving early tomorrow, so Katja need to bring it back with her today. Others have the last part done after they leave and get it delivered finished the day after. She was finished right before six, happy with both the experience and the product.

This is the way to do it.

Looking good before the action starts

Let’s see. Right to left, or left to right?

Ahhhh, to many threads

What do I do now?

I am taken to a different village to make my own knife. I meet Mr. Pahn who’s fifty four and is a blade maker by trade. A trade he learned from his father and that he passes to his sons. That said, Mr. Pahn is so successful that all his kids are in school or universities and only practice this art in the weekends.
The driver is also today’s guide, and I’m lucky to have Ahn there. Not only as a translator, but it turns out he studies photography. He take a lot off pictures and will send them to me afterwards. (Edit: At posting time, weeks later, I have not recieved them unfortunately.)
We start by getting me into the basics of knife making. Not a long theoretical schooling. Just the elementary. Then we talk about what kind of knife I would like to make. Pahn shows me the classic design of the Laotian multi knife, or maybe machete is a more appropriate term for it. I guess it can be compared to the Sami knife in the Nordics, or the Mora knife of Sweden. Only a bigger and more badass design. It’s the tool everyone uses around here. We see it at the fruit stall, where you buy fresh coconut, at the street food stalls to cut meat, to mention a few. Other people had made smaller knives to fit in their kitchen, I want one that matches my BBQ out back. I go for the full Monty, the Laotian multi tool.

First we have to cut the piece of metal from the spring of a car. The metal used is bought at a nearby car wrecker and we use part of a spring blade as base. He’s set up shop just outside his house and we fire up the coal and the homemade ventilation blows the flames to life.

In mere minutes the steel is glowing red and he takes it out and place it on the anvil. His son works the sledgehammer first to show me how it’s done, then it’s my turn. I hit the wedge to break loose the metal piece we’re gonna work with. It takes a few rounds in and out of the fire to beat through the metal and to get the piece loose. Pahn is only talking Laotian, but it’s pretty clear when he wants me to stop. For more power he uses the guide. “Harder, more power!” And I obey. I hit that wedge with all I got. Pahn laughs and it’s translated into:”Big man, big hammer, lots of power.” I smile while I wipe the sweat off my face.

Hmm, so that little hammer is mine? 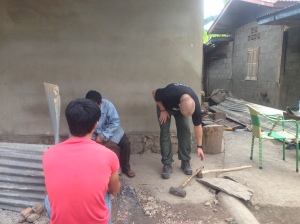 I can use that

I’m here wearing long pants and shoes. It said in the email that sparks will fly and it’s good to cover the legs. It doesn’t do me any good in the heat though.
From then on its a long run in beating the metal into shape. I thought the piece we took out was a little small, but it’s because we’ll beat it into shape. In and out of the fire, instructions on where and how to hit. Different powers for different sides, more on the flat sides, less on the back and the edge. I take turn with the son and hammer away. Getting into the rhythm I nearly break out in singing. In and out of the fire, red hot steel, and I’m shaping it to my will. It’s awesome!

Remember to pull straight back after hitting

That’s it. Hit that sucker!


At the end of the shaping Pahn shows how to us the smaller hammer to straighten it out. Looks and sounds easy. Decieving, in other words. Just holding the steel in place with the pliers is hard. His small hands are strong as iron, and he has made his own tool to fit his hands. My hands cramp up by squeezing around the handles. I suck it up, though. This is my knife. I need enough help as it is if I shouldn’t need help holding it still as well. I hammer it, get a crooked line straight and immediately get something else eschew. In the end I learn a trick, looking from one eye to another’s eye with the aim of the blade will tell you if it’s straight. Mine isn’t and Pahn do the last straightening for me. 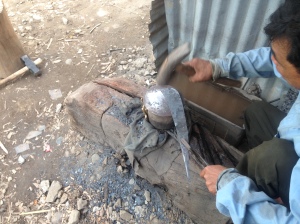 Finally satisfied with the blade we make handles while the steel cool down a little. It’s made of bamboo of course, and we make two. One extra so I can change it if the first break. It includes a metal ring that I have to make. First I bend the flat metal into a round shape, with meticulous detail on the overlapping parts. Then we weld it together with copper from a wire and pulverized enamel from an old cup. Cut the wire, strike it on the anvil to take off the wrapping, flatten it, break it off in the correct length and put it in the overlap with the enamel. Then the ring is placed in the fire and covered with coal. Heat to a thousand degrees (don’t know exactly, but it sounded cool, right?) and wait for it. Take out and cool in a bucket of water. Solid as anything.
The bamboo is harder to handle. Cutting it to shape and preparing to fix the metal ring is hard. Luckily I get to do a dry run first.
Rubbing the blade, I have no better word for it, to get the shiny steel look takes a while. And trust me, the blade gets very hot while it’s done. I do most of it, but the final rub to create the edge is done by Pahn. It’s hard enough to sharpen a knife properly, to actually create the edge is far harder.
Then it’s more polishing, maybe a bit tougher than polishing, to get the dark metal turn into the shiny blade. When that’s all done it’s back in the fire with it. This time to harden out the edge. It’s literally sizzling hot as it comes out of the fire and it gets dipped in the water. Not all of it, only the edge and the tip. I’m not supposed to cut down the biggest trees before five months time. In the meantime I can basically cut anything else.

Rubbing and polishing to creat the edge

Getting the handle on is a piece of work in it self. The bamboo now have the metal ring on it and we heat the back end of the blade. Taking it out red hot it’s put into the center hole by the metal ring and pushed down. Rather, the blade is down, the handle up and then pushed down. The metal burn away the wood until it’s all the way in and strapped by the ring. This is not enough though. Glassfibers from an old sack is torn up and showed into the handle, a couple of rounds with a red hot steel blade and the glassfiber makes a glue as strong as anything.
Tada! My new knife. It’s sharp already, but it get a round on the wet stone and I swear I could have shaved with it.

Mr. Pahn and Ahn (my guide) looking at a Laotian knife and the raw metal we just wedged of the car spring.

It took us almost four hours to produce “the Beast”. The fact that Pahn had made twelve of these before I showed up at two o’clock probably say something about my skills. While we wrap things up a lady comes to him and orders forty nine knives. She will sell them on the market in town. Pahn makes his business there outside his house as a wholeseller, with no need to go to the market to sell his own products. He likes it and then several can live off what he makes.
Wrapping it all up I am grateful for this experience. Seeing the transformation in the steel was very rewarding and I recommend this kind of activity for anyone who wants to do something a little different.
I mean to use this knife by the barbeque to cut up meat and chicken. I don’t really think that came across correctly as the guide closed off by claiming I would easily kill the chicken back home. Guess BBQ start off a little different here and home. 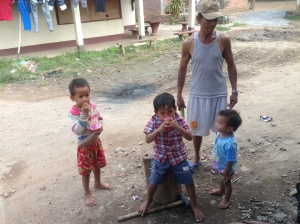 I was enteraining kids of all ages during my work

I get dropped off back at the guesthouse and Katja it’s fifteen minutes behind. We go to the street food alley and order fish.

On the way to dinner

Unfortunately it’s not as good as yesterday. Not even close. So we cut the meal short and go to a nearby cafe for a coffee and some pastries. We watch the Luang Prabang night market get settled and start their bargaining. We walk by a mini mart to get yogurt for tomorrow’s breakfast and walk slowly through the streets back to the guest house. We’re moving back down to Vientiane for one night before moving out to Bali on Saturday.

I’ve always wanted to go to Switzerland to see what the army does with those wee red knives.