Early morning rise and we have a plane to catch. Yogurt from yesterday with some muesli and bananas goes a long way for breakfast. Tuk-tuk’s not on time, but hey- we got plenty of time.

Check in and security on the airport is a breeze and we board a very modern plane. Modern enough to not have no “no smoking” signals, but a signal for not using electronic equipment instead. We’re barely airborne before we’re descending towards Vientiane. Twelve hours in bus on bad roads, or forty minutes flight… It was a easy choice.

Getting on the plane


We pick up our large bags from our previous hotel and go to the new one. They have an early checkout and the Manager makes housekeeping prioritize our room and we get it even though it’s just 8:30. That’s a service we can enjoy.
We relax a bit before heading out. We have no plans today except one: Send stuff back home. The knife I made yesterday, among them.
Finding the post office should be relatively easy with the help of Google maps, but that doesn’t help so much when they have moved. The local people are very weary of not losing face and will send you in any direction instead of actually admitting they’re clueless. “Yes, no, right, left” in the same sentence is not uncommon. Finally we find a man with both knowledge and English skills. He guides us right and the process of another package is starting. 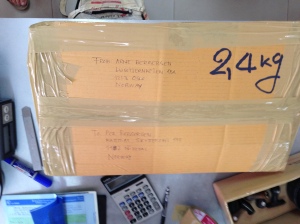 Another packet in the mail

The lady helping us with the packing is a tape pro. She uses about half a roll of tape to wrap up the knife. Guess I’m not the only one who’s sent something like that home. The package costs more than double of what I paid for making the knife. But hey, the Beast needs to go home. Dad, I sent it to you. Please unwrap it and check that it’s not rusty. If it is – oil it up for me, will ‘ya? Thanks.
We got lunch at a little street shop. Pork and rice. Cheap, but in so small portions we needed two of them.


The rest of the day was relaxed. Coffee and banana bread at Joma, then an afternoon nap followed by a great dinner.

Banana cake with vibes so hard I get unfocused


Before dinner we walked to the riverside and watched the sunset. A brilliant red sun went down and we, and hundreds of others, watched it. Then the music started to play. “Livin’ la vida loca”, with Ricky Martins boomed out of under-dimensioned speakers. More and more people came along and suddenly they all broke out in aerobic moves. Katja went along, of course, and joined in on the moves. A lady was in front and gave commands, in Laotian, but they were easy enough to follow. Young, old, men, women and one in wheelchair moved along. I took pictures and smiled. And as a fun fact; there were several of these classes along the riverside. Thanks for warning us, Arild!

A second group further down the riverside


We had spotted a French restaurant that made couscous every Friday and Saturday. Katja had that while I had a great local steak. A brilliant ending to our time in Laos. This country has showed itself off in a beautiful way. If you want to see it while it’s still relatively fresh GO NOW! The Chinese are connecting a railway into this country and I think that will change it for ever. And I do not mean that in a positive way.