It pays to ask if you don’t really get what the Thai’s are telling you. We found that out this morning.

When you already have asked a couple of times because you can’t really decipher what someone says to you, you just nod, agree and let it slide. Not always helpful.
We decided to do the morning class of Muay Thai today and we’re ready to train a couple of hours before breakfast.
It’s the last Saturday of the month and that means it’s BBQ Beatdown tonight. A monthly all you can eat and drink party where you can sign up for Muay Thai fights. If you by reading this even thought a old guy like me would do something like that you need to readjust. Get a grip, will you?
Since they prepare for the party there is no training on site, but the bus leaves for training on the beach in a few minutes. We stay and practice by ourselves for a while before grabbing breakfast. 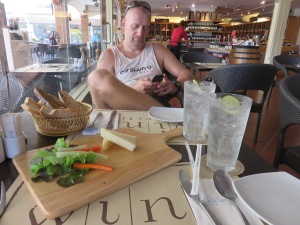 We have hired a motorbike and go to the beach for a few hours where we enjoy the sea and the sun. It’s so hot here that staying out in the sun is absolute murder if you’re not in the water. There are plenty of people here laying in the sun, some as red as tomatoes. Good luck sleeping tonight.
There is a new law recently passed here in Phuket that regulates the sunbes. Yep, a new law to battle the people doing monkey business at the beach. So we don’t get to rent sunbeds anymore, but you can get a mattress on the beach with an umbrella. Just what we need.

Katja in the water

Fruit juice on the way home

Fruit juice on the way home

Lizard at the gate of the hotel

We drive home and relax a little before heading over to the BBQ Beatdown. It’s a big buffet and the food is great. We are even lucky enough to get seating and talk with a new bunch of Swedes that have just arrived.
There are six matches tonight and I don’t really get the concept. We know two of the girls that are matched up. One have practiced Muay Thai for four years and have four fights. The other one have done it under two months and is using it to lose weight. She has no idea what it means to be hit in the face full force by someone else. There are stricter rules than in open matches and more padding, but still.

Part of the buffet

Two matches out of six are relatively decent. The first and last. The first had a fifteen kilo heavier Australian trying to take a younger and lighter Romanian. The Romanian took a beating in the first round, but the Australian had no more stamina and was knocked out in the third and last round. In the last fight a Norwegian tae kwon do guy did western boxing with the first Romanians friend. Gung ho, fire in the hole, slugfest and bar brawl. But the Norwegian were crowned the winner by unanimous decision after three rounds.
For the two girls I mentioned it was a disaster. The more experienced girl ended it in about a minute. The other girl crying after been kicked and punched in the face for the first time. She did not know what she signed up for.
The most provocative, at least to me, was after a young Thai guy fought a western very short guy. It ended as predicted when the Thai kid (estimated age of 16) kicked and kneed the living daylight out of the small guy. After that his trainer jumped into the ring and pretended jerk off and to ejaculate at all us westerners standing around. Most laughed it off, but several where disgusted by it. It was a clear show of how the locals view people like us. We’re a nice meal ticket, but damn you if you try to best any of them in their traditional pride. Then the gloves come off and they’ll beat you to submission. I guess this also reflects upon the rather weak educational approach to teaching us Muay Thai. We do basic moves, punch and kick pads, but there is no real “give and take play” or sparring. There are no talk about strategy of a fight, of defence to anything but straight punches and roundhouse kicks. I have now switched off most of the martial arts perspective when training Muay Thai here and view it as a fun way to do cardio. We’ll pick up some private lessons to enhance our skills, but for the group training I’m not expecting to become a better fighter.
After the fights we go home. The party is moving to the dance floor and that is definitely not my scene. Two Swedes have already been fist fighting and my patience with drunk people only last so long. They’re better off without me, I’m better off without them.

An eye for an eye will only make the whole world blind.