Sleeping long are for suckers. We get up an do breakfast before getting on the bike.

The central  post office is open from 9-12 on Sundays and we have a packet to send. Not to Ben this time, but fear not, Ben. There will be more in the near future. 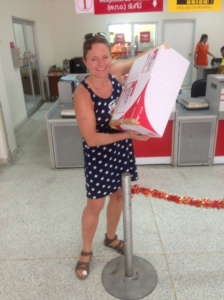 We’ve had several very positive encounters with the postal systems of the countries visited. So far the most chaotic is probably the Central post office in Manilla. Today’s visit was a breeze, by the way. Under a Euro for a big box, three different prices for sending depending in time and means of transport. In ‘n out in under ten minutes including the packaging of the box.
Phuket is slow on Sundays, but the a Circle coffee place is open. We take a coffee there while checking out different things. How to get from here to Krabi? That’s one if the issues we’re contemplating. Bus, boat or hired car?
A free day often includes a trip to the mall, so also today. Just yesterday I said I’m glad I didn’t grow up hanging around in the mall. Upon which Katja replied:”Better to wait until now that you’re grown up.” She might have a point, though I doubt I ever really grew up.
This time we’re looking for sunscreen and razor blades. You know it’s a good idea to shave the small hairs on your toes before covering then with sports tape? Trust me. When you’re “lucky” enough to actually have hairs on your toe it’s the most intense pain when they’re pulled. It’s like putting your toe in cold water and then immediately into burning lava. Or something similar. Anyway, I need to shave different parts of my body. Hence the razors. The sunscreen should be self explanatory.
From the mall we go to Patong beach. We’ve been there before and then we got hold if a couple of beach chairs. Relaxing in the shades while listening to an audio book seemed like a good idea right now.

As Touristy as possible

The guy you see hanging behind the tourist is not connected with any safty devices. Talk about danger at the worksplace

We spent two hours at the beach just relaxing. We slept a little, read a little and just some people watching.
When it was time to go our motorbike was moved to make space for the tables for a restaurant that wanted to serve their patrons close to the beach. Luckily for us we were pointed in the right direction and found the bike. 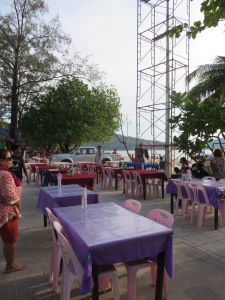 Wasn’t this where we parked the bike? 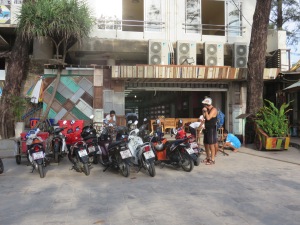 Ahhh, there it is

Since we drove from Patong and towards home we passed the fruit juice place we’ve visited a couple if times before. Once again they wiped up great juices. 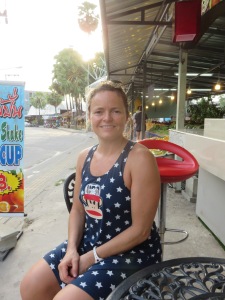 Waiting for the best juice 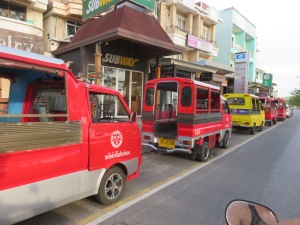 We had aimed for middle eastern food for dinner and drove to the restuarant we found on tripadvisor. Wouldn’t you believe it’s the same restaurant we stopped into to ask direction to a repair shop when we had a flat tire? What are the odds of that?
We ordered different good and found all but the hummus to be good. The hummus on the other hand tasted like when you inadvertently spread jam on your toast but get the mold on it as well. Then you take a big bite and chew once to many before you recognise something is wrong and you want to spit it out. Something like that. But as I wrote, other than that the food was delicious. The toilet was a piece of art. No, Literally a piece of art.

After getting about half way home Katja realised she left her sunglasses on the restaurant table, so we turn around and go back. The staff has taken care of them and we are once again on our way home.
I drop off Katja at the hotel and drive further down the street to pick up the laundry and then return the motorbike. Two boys no older than fourteen control it for damages of any kind, but deem it OK and I get my passport back.
I have never before had such a loose attitude towards my passport. It’s been one of my most prized possession and a bad thing to lose in connection to possible ID theft. Around here it’s collateral for a lot of things, among them motorbike rental.
The evening is spent watching TV and relaxing. The heat rashes are flaring up now that I’m off the anti-inflammatory pills. It itches and doesn’t look good at all. Another visit to the pharmacy in the morning.

“Get To The Choppa!”