This morning was in the name if the Grand Palace. At least until we walked out the door.

We got a tuk-tuk to take us to the Grand Palace, but the driver said the palace don’t let people in before around ten. These guys are damn good liers, it quits turn out.
We drove to the river and got on a boat to see the riverside and to visit Wat Arun (temple of dawn). The main stupa in this Wat is depicted on the coins here in Thailand. Turned out this Wat has been under renovation since February. Strange nobody thought of telling us that before selling us tickets. Anyway, it was a grand place with beautiful craftsmanship.

Poster telling not to use the Buddha for decoration purpose

Grand Palace seen from the river

The boat took us across the river and to the Grand Palace. Holy cow what chaotic touristy infected place.
Just to set things straight, we’re also tourists. We’re hopefully more travelers than tourists, but make no mistake; we’re nothing like the Korean invasion. The tourists is not reflective nor does he take the local customs seriously. There’s loads of signs about dress codes and to keep a lower voice in the palace. The Koreans scream, push, shove and use umbrellas in the most crowded if places. Katja almost lost it when an Korean lady shoved her aside to try to catch up to her group after taking a selfie and thereby falling behind. Katja shoved her back and it would have been cool to see this play out all the way. The Korean tried to explain, in Koreaen, that she was aiming for the guy up front with the selfie stick with the yellow flag. After a Korean-Norwegians exchange of pleasantries we turned our backs and walked away.
It’s strict dress code at the palace and we had to borrow long pants, skirt and shirt to enter. Today’s temperature inside the palace us about forty degrees, I would guess. Sweat is running down legs, arms, back and we’re still not at the ticket counter. Oh, and did I mention the screaming Koreans?

We get inside and it’s even worse. The Korean groups are gathering at the same place to get information from their guides. These guides then compete in shouting the loudest to make themselves heard. Not only above the other guides, but over the noise of their crowd that talk loudly among themselves with a blatant disregard for the information given.
We see so much bad and rude behaviour in the hour we spend inside the palace. People cutting lines, pushing, screaming, stopping in the small openings everyone needs to pass through, pushing themselves in front of people trying to take pictures so they can take their own picture. It stress me out. This place is beautiful but it’s ruined by people with bad behavior. If you ever want to go here go in the morning. It does open at 8:30 regardless of what our tuk-tuk driver said. Get there before the busloads arrive. See it before the sun gets to high. Just don’t do it in the middle if the day.

Humongen’s view of the crowd

Outside of t worst crowd. We waited long for this picture

It’s hot in the sun, even for Asians.

We got out and the third taxi we asked gave us a fair prize to go to the mall. Katja wants a new handbag. I  want coffee and lunch. The driver gave us half price of the first, but he turned out to be a nut case. Luckily he drove OK, but he’s constant babbling was like what you see Brad Pitt do in 12 Monkeys. If you haven’t seen the movie then shame on you.
We got a cup of coffee and relaxed at the coffee bar before going to the food court for lunch.
We found a place called Piri-Piri that served delicious chicken. Grilled to perfection and spicy like a good street food. Yummy. 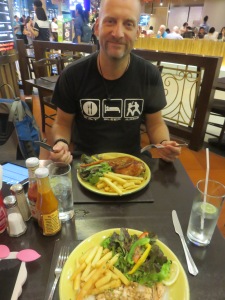 Then thing almost got out of hand in regard of the handbag purchase, but we managed to talk through it and sort it out. Phew, close call.
Now we’re exhausted and just want to chill out in the room. We take the sky train home and get some lime juice for Katja’s no poo on the way. After a cold shower I pass out in the bed.
We do awaken early enough to go to yoga before meeting Sverre for dinner. It’s the same instructor that we had the first class, the one I didn’t like. I breath more calmly and focus on my training. After class Katja asks if it was better this time. I conclude that I still don’t think he’s a good teacher, but that I had a more relaxed mind. Thereby securing a better practice for myself. Now we do a quick shower and change before going to meet Sverre.

Exchange Tower. Telenor is in 36th floor. True fitness and yoga is also there

Sky walk to take people out of the traffic

Sverre suggested a restaurant called Cabbages and Condoms. You had to read that twice, right? But you didn’t miss, it’s called Cabbages and Condoms. Lonely Planet describe it as follows:” This longstanding garden restaurant is a safe place to gauge the Thai staples. It also stands for a safe cause: instead of after-meal mints, diners receive packaged condoms, and all proceeds go towards Population & Community Development Association (PDA), a sex education/AIDS prevention organisation.” A worthy cause in a place like Thailand. The place was decorated with condoms in all forms and fashion. Used for making dresses, lamps and more. Quite the unique place. The food was good, the company better.

Sverre is my brother in laws friend, and I guess I met him first time in the late eighties. Now we meet at all the extended family gatherings at my sister’s. He holds a position in the Norwegian mobile operator Telenor that is the second largest operator in Thailand. They have several times more customers here then there are Norwegians. Understandably a market to explore. Sverre have lived here for a few months and will be joined by his wife and daughter in summer. Adventurous for sure.

All the lamps are made of Condoms

Does this makes us dicks?

Hot in the city. Doing the Filipino chill down

We get back to the hotel unmolested and just turn in. A morning yoga tomorrow calls for maximum sleep.

“Think in the morning. Act in the noon. Eat in the evening. Sleep in the night.”