Time to change the venue again. We’re flying back to Kuala Lumpur today and then we’ll take it from there.
After a quick breakfast we pack and go down to the reception. The security guard we’ve been talking to has a bit of a hangover today. He’s been a guard here for twenty years, and before that he even helped build the building. We found out yesterday that he was in the park practicing kung fu yesterday morning. Really any morning, but we saw him yesterday. We didn’t notice it was him across the little pond, but we saw he has real power in his punches. Cool dude.

The hotel wanted almost twice the money for organizing airport transfer. We talked to the lady who handed our laundry and were suddenly en route to SGN terminal 2.

We’re getting used to check ins and security by now. And also the fact that Asian people will cut the line at any opportunity. We’re in no hurry and the old lady cutting the line seems to act like she own the airport. The fact that she doesn’t seem to know an immigration counter from a security scan kinda wreck the image though.

The flight is under two hours and we move one time zone further away from home. We’re now six hours ahead of Norway. The lottery company needs to take that into account when they call to announce us as winners.

What’s with airports and prices? I’ve been ranting about this before, but it still pisses me off. Having to pay five times the price for water is nothing short of robbery. And now I’m comparing it to hotel prices, nott the mini Mart down the street. Having a monopoly on water that can be brought onto the plane must have made many a company solid dollars.

At Kuala Lumpur we get a taxi. There’s a train running, but it won’t take us door to door and it will be more expensive in total. The taxi is one Euro more than the train tickets. Adding the cost from the central train station to the hotel would at least even it out, probably exceed it. Our taxi driver is a funny guy with a couple of broken teeth and looks like a mma fighter, and tell us his wife is teaching him English. He tries to explain about shopping centers and the weather and he has a much nicer attitude and energy than what he looks like. I tip him ten ringgit which it’s the equivalent to two euros. There’s no tipping culture here so he’s overwhelmed. “Keep practicing English”, we tell him. There’s probably no other single thing that better can position you in the tourist industry. 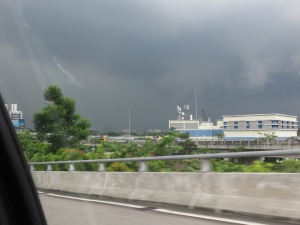 The room we booked was a mystery deal. It’s supposedly cheap, but you don’t get to see pictures. This was a really good one. For the price of a cheap room we got an apartment. Big living room, kitchen, big bedroom and connected bath. Sweet. We booked two nights but will have to work out the schedule for the coming days. Maybe we’ll stay here longer, maybe we go on. This place have a swimming pool and a gym. We take a look at it before heading out into KL. It got two treadmills so we can do anther interval session here. Sweet. 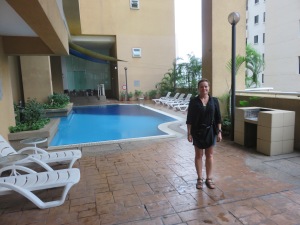 It’s rainy season now and the afternoons are wet. That’s something we’ll take into consideration when planing the upcoming weeks. We borrow umbrellas in the reception, get directions to a supermarket and head out.

We planned to make dinner in the room, but time flies and we have to eat before we turn on each other like brain dead zombies. A short walk from the hotel and we’re in a known area of the town. It’s very close to the fancy hotel we stayed at during Xmas. We dive into a middle Eastern restaurant and enjoy a very different taste from the noodles we’ve had plenty of lately.

We walked down to the Pavillion shopping mall. We’re looking for a yoga place and think we might find it there. We don’t, but take a walk around to look anyway. The shopping mall was insanely decorated for Christmas when we where here last. I’ve never seen anything like it. Today it seems The Squarepant has taken over. 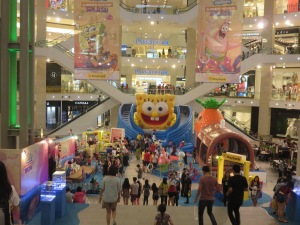 We found a fitness shop in the mall and finally acquired a couple of yoga straps. It helps immensely when stretching and can be used in so many ways. Guess my hamstrings are gonna have a hate / love relationship with this. We locate a movie theater also and behold, Jurrasic World opens this week. Maybe we’ll catch it here before moving on.

Katja with friends trying out the seats

We also found this

We moved from Pavillion over to Low Yat, the Technological High Tower of KL. I’m looking for wireless headset for sports and hope to find it here. The place is overly crowded with shops and most of them focus on PC’s and Mobile phones. We do finally, after hitting several stores, find a young man, Hao, to help us out. I get myself a set of Jabra Smart Pulse and they feel great. We did buy something else there as well, but that’s a secret to be revealed on a later date. Or maybe never. Muahahaha.

The KL Tower in green in the back

We talk to a cabbie to see if we can get a taxi for a decent price back to our place. The taxis here in KL are a story of their own. There’s Budget and Executive taxis. The latter usually drive station wagons and charge twice as the budget. The budget might be a brand new car, so there’s not like it’s crap vs style. But all should run on meter, but few wants to. The guy we talked to wanted 20 Ringgit for a ride that should probably cost 6. We walk away. I hate taxi drivers that try to skim tourists like this. Had he said 8 or 10 we would probably go, but 20 is outrages. Then again, 20 Ringgit is like 40 NOK so were not taking about a lot of money. But if you’re on a budget you’re on a budget. And I don’t want to make it easy for them to continue to screw over others. We walk home and since it’s stopped raining it’s a nice walk. The heat is not so bad, and it’s a lot less humidity here. 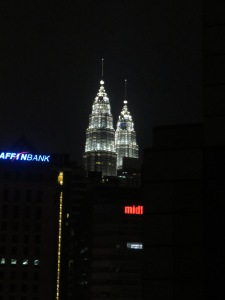 “I had to quit my taxi cab driving job because I had no way to get to work. The problem was I kept calling myself to come pick me up.”

― Jarod Kintz, I Should Have Renamed This