It’s been a year. Already? Are you insane? A year? Now? But…. but….Today marks the 365th day of our travels and we are officially been away for a year. We left Norway August 1st and that’s 365 days ago. Man, there have been times where it feels like nothing moved forward. Mostly, and strangely, these days have coincided with loose stomachs and vomiting. Other than that time has flown past much like it did back home. We have some fantastic memories and experiences to show for it, but no matter what you think – this year has gone by in a flash.

When I write this it’s afternoon on July 31st and I’m waiting for Katja to come home. Seems like I spend a lot of time doing that these days, but I’m not complaining. We knew this was the setup from the start, but after spending basically 24 hours of 347 days together the last 18 days have been different. We planned a little ahead and will spend 4 nights on the beach here at Bali after the course finishes before catching the flight back home.

We have started to make up lists for rating the best this, and the worst that. I guess we’ll post it a little closer to the end, but it’s hard to rate all the good stuff. What meal was my best? Was it the taste or was it the setting? Or the company? Or the surprise when something that looked like mud tasted like heaven? Hard to tell, and hard to rate without setting up a description for each and every choice on the list that will make unreadable in length.

We’re getting ready to go home, though. The date for our arrival in Norway have been set for a while and there’s so many things we look forward. You might say we’ve been mentally preparing ourselves for this, and I guess that would be fair. Instead of dreading to go home to the hamster wheel, we’re happy to return to our families, house, the ability to cook your own meal, decent internet connection (I set that up with Get today so it’s ready upon return), sleeping in a bed that’s ours, sitting on the back terrace and talking to the neighbors, driving on the right side of the road, meeting up with friends – there’s just so much good back home!

And all this don’t even happen in Blue Moon cycle. Today, the 31st of July will be a Blue Moon. There are lots of writing about it in media, and the following is a description of the Blue Moon from Timeanddate.com:

When one of the astronomical seasons has four full Moons, instead of the normal three, the third full Moon is called a Blue Moon.

But I guess you already knew that before heading out to look at it? We looked it up and went out and Katja thinks the universe is talking to her by giving us a little hole in the clouds to expose a beautiful blue moon for us. 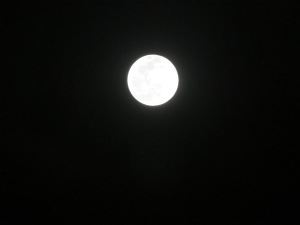 “Once in a blue moon”

I got up together with Katja and was her dummy student for rehearsal of the poses she’s teaching tomorrow. A constant improvement in choice of words, flow, smile and cuing is there. Strangely how training improves on your performance.

I have done another Yin class today and stretched out hamstrings, lower back and inside of the thighs. A class that have given me much to take back into stretching when we start teaching martial arts again. There will be pain, but there will be results. I have learned a lot about “stretching” during this tour. Especially from the different approaches to yoga, but also from our strength coach on Mandirigma Camp, Joe, who explained something I have heard but not understood before – in such a way any idiot, and thereby myself, was able to get it.

I spend time getting the blog a jour and write, post pictures on the net. Then I watch an episode of Criminal Minds when Katja comes home. She is covered in tears and she’s totally upset. “Worst day ever!”, she exclaims before really starting to cry. When the tear tanks are getting towards empty we talk and it turns out it all went sideways during a teaching lesson in the course. My description would only be second hand, and it’s written the morning after. Therefor I will be careful to not say to much. Suffice to say an interruption on her performance tilted the scale in the wrong direction and all frustration and feelings from three long weeks came bursting out. Anyone who’s ever started crying in front of other people know the feeling of shame that’s connected to it. It’s not rational, but then again, crying is often more related to emotions that rationality. Katja told me she stood in place while crying and made the other students do what she was supposed to make them do, but that it lasted probably twice as long to get it all out. I’ve written it before and I’ll do it again: This course is way more intense than anything I’ve ever known. The amount of “touch-on-your-feelings” and “Experiences-in-meditation” are all really heavy stuff. Since Katja didn’t take last Sunday off, she’s now on her 13 consecutive day of touching her feelings. Glad it’s her and not me. I’m not sure I would have the back and the strength to pull off what she’s doing, and at least not with such quality. Anyone who really knows Katja know she wants everyone to be included and strives for excellence in her own performance at the same time. That might be a tad to much over such a long period, and with such heavy material.

I take the bike and pick up laundry and food from our favorite rendang place, while Katja takes a bath. We eat upon my return, then we work on tomorrows performance so she’s not doing it for the first time after “breaking down” when she’s in class and giving the class. It’s better than ever before, and I start to wonder about the “If it doesn’t kill you it makes you stronger”-saying. There might be something there.

…the tough gets going

We talk, joke, she cries a little more when appropriate (and not) and we fade into the night before the big day tomorrow.