With a dare devil approach to life, we rented a motorbike and set of into traffic. With a mantra sounding like: “Drive on the left side, Padawan”, we managed to stay clear of any scary situations. We visited three holy sites and passed through lovely rice field landscape during the day. Read on for info and pictures.

First of I have to say I’m grateful for having spent some time in this country and traffic before driving. The constant honking would have driven me crazy if it was not understood as warnings and preparation for passing and – well, basically any movement on the road.
The left side driving went better than expected, and I do think it is easier on a motorbike than in a car. Still we stopped before any entering into traffic and both said out loud:”Stay on the left side!”

We visited three holy sites today that each have their own unique history. First of we went to Goa Gajah, also known as the Elephant Cave. This is a old sanctuary that was built in the 9th century. Earlier it was believed that the main stone carving over the entrance was an elephant, and hence the name. I still don’t know what it is, if it’s not an elephant. There are many thing that amazes me with the Balinese culture, but their ability to carve rocks is up on top three. It is a lot of sandstone around, and that is easier material than your normal grey rock from Norway. But the fact that this portal still stands after over a millennia is quit cool. The inside of the cave was nothing compared to the entrance. There was also a bathing area at the site that was not excavated until the 1950’s. Probably meant to scare away evil spirits. This is a temple placed on UNESCO’s “waiting list” regarding world heritage.

Outside the Elephant Cave

From there we drove further north and came to Gunung Kawi. This is temple where there are huge shrines carved into the mountainside on each side of a valley. The shrines are about 7 meters high, and quite massive. It was a bit of a walk down in the valley, and it was hot! It was absolutely worth the trip down, ’cause we were taken aback when we saw the size of the shrines. All these temples are quite well preserved, which I imagen is rather hard in this climate. With the heavy rain several months a year probably taking it’s toll on this. This temple was built in the 11th century probably to honor king Anak Wungsu. A King we all know, right? 😉

Some of the shrines in Gunung Kawi 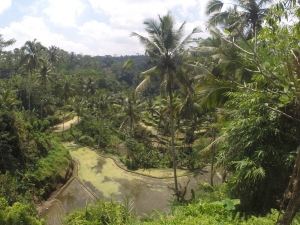 A view down towards Gunung Kawi

Creek at the bottom of Kunung Kawi

Before reaching our last temple of the day, we got a little of track. Not lost, not really, anyway. 🙂 But we did drive a bit further than necessary. As we drove on, we noticed that the road were getting more and more narrow, and with more and more holes. We turned around when we found a little village where they smiled and said: (To be read with a tinge of “not-so-good-at-English-with-Asian-accent”     Tirta Empul? Noooo, looong waaay – back dooooown.

We got a bit lost. But the view was nice

And then we came back down to Tirta Empul. It’s a place people go to for making a cleansing ritual. It was obviously much more than a tourist trap, for the locals came in great number and spent a lot of time showering and drinking the holy water. Anyone could do it, but given the fact that it is a Hindu cleansing ritual we both passed on the opportunity. Let the locals have their rituals and privacy in that matter. 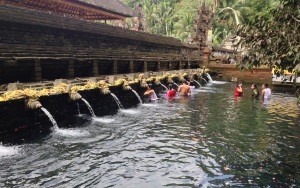 After our cultural round trip we set out with destination Ubud again. Along the way we found a restaurant with organic food, and stopped for a bite to eat. Actually this was our second lunch, as Katja (again!) got herself a larva of some sort in her avocado wrap. Yes, it happened in Sanur, and on the second try she got one more. It’s enough to loose appetite, so we needed a second lunch today. This place was great and they served good food, delicious coffee, nice tea and with a view of rice fields and gees. Yes, lots and lots of gees.

Pit stop at the Padi Organic.

Just a few of the wild(?) gees in the rice field

Returning the bike with a full tank of gas was required, so we stopped at a local shop to “fill ‘er up”. The cost of fuel here is ridiculously low. Less than 4 NOK or 0,5€ per liter. 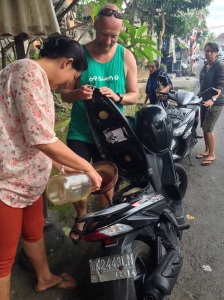 And as a finally notice: You may all now realize that we survived the garage food from our local warung. Not just survived, it was an excellent dish and we paid 1/4 of the restaurant price for it. Today we will go to another small warung to try out their food.

P.S. I hope you know you can click on the pictures for larger images