Friday morning started out with Yoga with Phil at Yoga Om, before the three of us went out to lunch.
We met Phil in Ubud, Bali, and have kept in touch since so we could meet up in Perth.
Phil  is the kind of guy that gives you love/hate feelings when he’s next to you in yoga class. Hate because he makes you realize at what level you really are, and takes away any self illusions from you. Love because he’s an inspiration for how it’s possible to be without having to be 20.
We had a nice class of yoga with som different moves I have it done before. Not sure if I’ll ever do them again either, as the neck is sore and over stretched. A result of some weird pose with our chest against the wall and trying to straightening out the back. Katja was laughing her ass of next to me, herself also clinging on to the wall.  The teacher came and tried to help me downwards but I had to realize defeat and  push myself of the wall. So not a pose I will do again very soon. 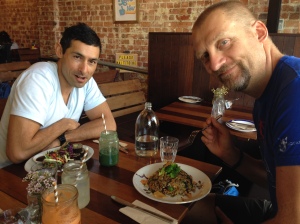 We went for lunch at Beaufort street. One of the nice streets with bars and restaurants in Perth. Phil and the yoga instructor both agreed that Solomon’s was a nice place, so we went there. And it was. They had good food, and good coffee. Phil is fireman and had just come off night shift. There are lots of things happening in Perth at night, some of these includes the firemen even though there isn’t necessarily any fires. He also told us a disturbing thing. As Western Australia is ridden with bush fires during the summer, it costs a lot of money and lives are lost every year. Most of these fires are deliberately set by humans. It’s not enough that a shard of glass can create enough heat with the sun to cause fires, people go around and set them. For Norwegians it’s hard to grasp what kind of destructive force such a fire is like, as the biggest fires we have are like camp fires in comparison. I honor anyone who takes a profession that are made for helping others. Be it firemen, police or health workers.
As we said goodbye to Phil we strolled further down the street of Beaufort. I was lucky enough to find a hair dresser and got a haircut. And to Katja’s great happiness the lady trimmed my eyebrows. As they grow like weed on a summer day, there is no proportion to the length of these few hairs above my eyes and the one one head. Go figure, but I looked stylishly enough afterwards.

With newly cut hair and eyebrows for everyone to see

And a step to the left as we got out of the hairdresser we found a frozen yogurt place. Damn!

Frozen yogurt shops are hard to pass up 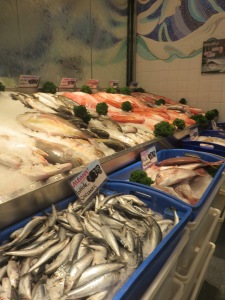 We headed towards Innaloo, another part of town, to go to the fish market and buy dinner. We got salmon, scampi and crayfish. It was to be a dinner worthy of kings. We also got a SIM card for the iPad so we could get online during the day, and not be dependent of the free WIFI in restaurants. So far so good. We ended that shopping spree by getting snorkeling gear for the both of us. Instead of renting for the rest of the tour, we now have our own equipment. Especially for the snorkel itself.
Back home it turns out we only got the salmon in the bag, and the scampi and crayfish are still at the store. A phone call later and we have arranged for pickup tomorrow. Luckily the salmon was enough for all of us.
Then, after registering and loading up with prepaid money on the SIM card, did it turn out to be the wrong size. Back to Innaloo again tomorrow anyway, so we’ll probably get it fixed.
We also got to meet Damien’s girlfriend Nadine tonight. They have been to a seminar of some sort and came in late. Luckily for them we had made dinner enough for all of us, even without the scampi and crayfish.

Katja and I @ Solomon’s