Before we left Perth the forecast for Boracay was cloudy and rain. Guess how it is.

We looked at the forecast in Perth and was a bit shaky that the weather wouldn’t be all that great here on Boracay. We shouldn’t have worried. It seems the clouds get stuck at the island that holds the airport, for here the sun is shining more often than not and there has been no rain. 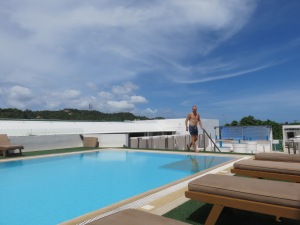 The Anusara inspired yoga was very good. Anusara yoga, as far as I have established, focuses on alignment of the body. This is great for old guys like me and we did exercises and poses to support that. I even managed something I have not done before: crow to headstand back down to crow. Don’t know what I’m talking about? No worries, just give me a thumbs up.
After the class we took a shower at the hotel and set out for lunch. We crossed to the other side of the island and got to see why most hotels are on the west side. The current and wind is much better, and there is hardly any seaweed on the west coast. Between these to sides some of the locals live in shacks. These “houses” are built from scrap wood, and leftovers (or maybe stolen) from construction sites. We took few pictures here as we did not want to intrude in the lives of the people there. The fact that they are poor should not be our entertainment. 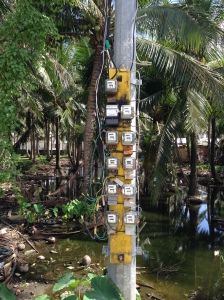 Power meters for the shacks

We walked further than planned and ended as we them normally do grumpy and bitchy with low blood sugar. When we got the lunch it was poor and small. Thank god for supermarkets and apples. 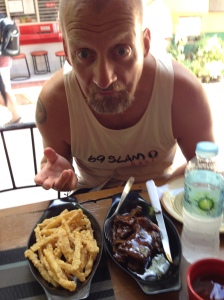 I walked all this way, and this is all I get?

Then I had a mission of getting us a couple of Filipino phone numbers. Hooking up with people in Manila will be much easier when you can sms and call. The Filipinos are among the most sms intensive people on earth. Along that road we ran into some problems. Operator locks on the phone is great when you want it cheap, but when your in need of another SIM card the Apple way of doing things sucks huge Mandarins balls. The operator lock could easily be removed as it was outdated, but the iPhone needed to be reset from scratch. That means that the phone needed to be whipped clean of all data and apps and restored from iCloud. I had to, but I would not recommend that to anyone else who’s stuck on a developing country’s internet connection. All audiobooks, music, pictures, apps with data is gone and is not realistically synced until I get back home. The process of taking backup of the phone is a joke, as it doesn’t take backup of your media (other than photos) to neither of iTunes nor iCloud. I knew what I went into, but rather than buying a new phone here I took the fall. If I need to do this every time I change SIM card in the phone, I can honestly say that this might be the issue that moves me to an Android phone down the road.

The process of getting the SIM card and numbers are a joke. This is probably the closest I have ever come to a burner phone like the one in the movies. No name is registered and it’s loaded with scratch cards.

We went down to the beach to see the sunset, and were not disappointed. It was beautiful. It was hard to get pictures that don’t include Asian people or other people’s selfie poles, but we tried. 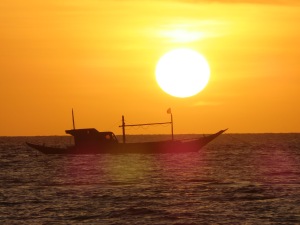 Then the local restaurants started putting out their tables on the beach. We grabbed one and had a very nice romantic dinner. We are truly lucky to be doing what we do and try to remains ourselves of that frequently. Yesterday was a good reminder of what we live for and how we appreciate it.

Romantic dinner. (But look, once again a “photographer” manages to cut off our feet while keeping lots of empty sky)