For all nice people the sun shines on their birthday. That’s a saying from my youth (which I guess makes it an old proverb by now.) We woke this morning to bright sunshine in Manila. Of course, it’s Katja’s birthday.

We made plans last night for training with Master Allan Fami this morning. He’ll pick us up around 8, so we got up before 7 to shake off the night. As we now both have a cold it’s good to be up and about a little while before training starts to rid yourself of the goo and clear the channels. I popped out for coffee as Katja made breakfast. It’s always enjoyable to start the day with her, but today was maybe just a notch better anyway.


We got ready and sat waiting for Master Allan. He lives in Quezon City (it’s a part of Manila, but the structure of this town is complicated. I’ll maybe do a post on it later) and that’s about an hours drive away from here. But that is if it’s no traffic, and today’s Monday morning… I guess he’ll be late. As I write this I check the time and it’s already 8:30. The Manila morning traffic is no joke, and I would be surprised to see him before another half hour has passed.
In the meantime we blog, surf and watch videos online. And I try to figure out why my balance on the prepaid calling card is gone. I had 1000 pesos (aprox. 166 NOK) and insanely numbers of free text, but somehow money is gone. I’ve looked over the stats on the phone to see if I can find the bastard app that has drained the load, but most are turned off from cellular data and the ones that are allowed have used a total of 90 MB. Pretty steep price with 1000 pesos for 90MB. There’s a devil in here I haven’t found yet. On the 7/11 at the hotel I got another load card and are once again online with Google maps and Gmail. The operator provides free Facebook use over this card. It even says so at the top of the app when using it. Says a little about how important social media is in these parts of the world also. As a little story of that: Today the elevator stopped one floor above us, coming up. It dinged and stopped at our floor and out walks this lady while looking at her phone. We go in, the door closes and Katja looks at me while pointing at the Ground floor button already lighting. “You think she’s on the right floor?” Probably not. Something to think about when it comes to self defense. Are you aware of your surroundings?
While we’re sitting here and waiting a familiar face comes through the lobby, Guillaume Foucaud. We have not seen him since Bali camp 2010, but Facebook is a great tool for keeping in touch. Guillaume is one of Fred Evrad’s students and an accomplished martial artist. It was so nice to see the recognition in his face as both Katja and I go:”But, but, but …GUILLAUME!?!” He’s now an independent contractor working in the retail market. He has extensive knowledge of the hypermarket industry from his time with a big French company having stores all over Asia. We’ll hook up for drinks later today. Gonna be so cool to catch up. What a small world, eh?
As I write this a text from Master Allan pops in. He’s stuck in traffic as I thought and I would be surprised if he’s here within another half hour, and it’s now 9 already. Gotta love Filipino time.
Finally Allan came and we set a course for Quezon City, part of Metro Manila. We did some catching up in the car and started training at once we were in the gym. 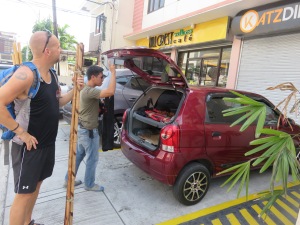 Humongen with short sticks. Also called Bangkaw or “long staff” by the locals

We started with basic movement of the bangkaw and progressed rapidly to more advanced moves. Not that we mastered the first one, but volume practice will have to be done at home. After doing about an hour of twirling and movement we moved into application with System 1 through 3. As we have practice the bangkaw very little since our last trip to the Philippines it was very cool to do this again. For our Karate readers out there a bangkaw is 6 feet which makes it somewhere between a Bo and a Jo in length. Working with a long range weapon is totally different than the CQC (close quarter combat) we normally do, and we owe a big thanks to Per Sutter for our ability to grasp the concept. “Flytta axlorna” (move your shoulders) kept ringing in our ears at we did long stance footwork and twisted from side to side. We kept it up for somewhere between 2 and 2,5 hours before we called it a day. We ended with some speed drills in attack and defense and we stood panting and dripping with sweat. Between our colds and a non air conditioned gym we felt good but looked awful. We also got to meet one of Master Allan’s top students who came by the gym. Hopefully we’ll get to train with him next time.

Katja twirling the Bangkaw on one side

Katja twirling the Bangkaw on the other side

GM Allan and me


After a quick shower, oh glory!, we packed up and headed back to Makati. Allan’s wife, Karen, works there so we all got back in the car and drove down.

As we now we’re pretty hungry from an early breakfast and belated training we went to a buffet. This is the place with the most greens and vegetables so far. It’s a mix between the shabu-shabu restaurants of Japan and the Korean/Chinese “BBQ on your own table”. The meat was good, the salads and greens crispy and the company good. We’d made little plans for lunch, but this probably triumphed anything we could have come up with.


We stopped by Karen’s office and said hello to her. We have not seen her since 2009 either, so it was nice.

Karen, Allan and us.

Then Allan drove us back to the hotel and we got us some birthday cake and coffee.

I’m having a birthday party!

Cakes and baguette from the French bakery, taken while waiting for the coffee to be served

Katja did a Skype session with her mother and suddenly it was time too leave again. Katja wanted to do Yoga so I went with her, but I’m not practicing. My sinuses are as full of snot as a four year old and it’s running in about the same pace as a kid in free run on the playground. I have parked myself at a Starbucks around the corner and strangely enough; there are no one who wants to share my table. Might be because I now blow my nose with a sound that should make Captain Ahab wake from the dead.
We’ve booked another session with Gerald in the park tomorrow afternoon and another with Allan on Wednesday. In addition to this, Allan is teaching firearms and we will go shooting with him also. The Philippines are loaded with handguns (pun intended), and it’s quite acceptable to carry concealed in the city. This facts made Allan incorporate guns ins his system Kalahi Martial Arts. So after we’ve been to the shooting range we gonna do the basic of gun disarming. We are used to play with knives and swords so a gun should not really be scary up close and personal, but still I fell that guns are worse. One mental thing to get over.
As time flies away (yeah right) as I sit here and wait for Katja, it’s getting darker and the traffic is piling up. Horns honking and a clear disregard for any markings in the road they all try to get first in line on the next intersection. Good luck with that.
There are also beggars in this town that we haven’t said much about. It’s a difficult subject as some of these people are obviously poor. When grandma at age 90 (maybe 60 but looked 90) offers up her dignity to beg at the trains station it’s hard not to give. At the same time is it not solving any real problems when another grandma is begging with her grandchild on the lap, as we encountered on our way down here now. Then it’s just sad and you know the kid has no real future. The other Kali practitioners in the park don’t give money, but sometime buys the homeless coffee or give them a piece of fruit.
We’re mostly walking in a rather business part of town, the Makati CBD (Central Business District) and we don’t encounter the extreme powerty as you might in other parts of town. Compared to Oslo it’s more beggars per km street back home than in this district.
Katja came out of yoga, we power walked back to the hotel, showered and got ready to meet Guillaume for dinner. We went to a place in the Makati area and had a great time together.

What we learned from Guillaum . this is the four elements. From the top: Heaven, earth, fire and water.

Hopefully we’ll meet again already in March, and when we come to Singapore probably towards the end of the tour. Thank you for making a special day even more special, Guillaume.
Now it’s later than any other night in Manila and Katja is trying to like and comment on all the greetings on Facebook. I’m starting to feel the soreness in the muscles from today’s training. Gonna be a tough next couple of days.

Some random pics that didn’t make it into the text:

This is for you, Ben. Nutcracker “dolls” the size of men

2 thoughts on “Beautiful birthday in Manila”