We have plans if getting our visa extension here in Thailand today. Training  first, then immigration.

Another good session by Maccachero today. We spent time in using both forward and backward rolls to shift positions and gain advantages on our opponent. Then we worked on defence for triangle choke.
Katja and I train together so I can join in even though the rib still hurts. I pass on the sparring, but watch the others. After training we get a picture of us with Maccachero. 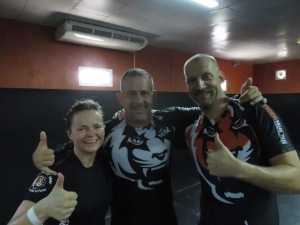 I do a private Muay Thai just thirty minutes after BJJ, Katja starts her when I quit mine. We are eating lunch separately for the first time in a very long time. 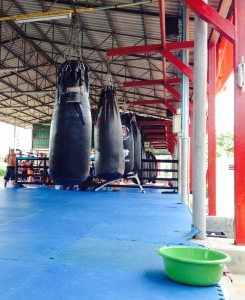 Bags ready to be punched. And the little green water bucket used to disinfect your feet before stepping onto the mats.

We finally get off to the immigration, but not without delays. The water is out in the hotel and we have to drive back to Tiger to get Katja a shower, but we get there.
At the Immigration office we find a veritable administrative chaos. There’s a couple of volunteers that check the papers and give you a ticket with a number. We lack copies of the visa and passport, but it’s a service right next door that provide it realtively cheap. It’s a place where they could rip us off, so cred to them for keeping decent prices.
The line is long and there are about twenty five people ahead of us. As we wait we have no way to tell if we’ll get through before it is four o’clock. It’s now three o’clock. Rumor has it you can not pay after three thirty, but that has to be wrong. I hope.
While we’re here we do a little people watching and there are a lot of entertaining characters here. We should have take a photo of the girl with dreadlocks in different colors, all on the top of her head while the rest of the skull was shaved. Can’t even begin to phatom how she can fit it all in on a passport picture. And the endless stream of people that don’t know it’s their turn until they’ve been called several times. Top this off with a double marking of the number three on the counter, where only one is active. Everyone here on the same mission as us go to a specific counter.  You would still not believe how many that sits down at the wrong counter and are asked to move to the next.
I know a lot of people don’t really like, or even believe in, the bureaucracy and governments. But when you need it, like today, you should be alert and know what to do and when. It cost little, but benefit greatly when everyone follows through. With twenty five people in front of us it’s almost half an hour of extra wait if they all waist a minute on average. Good thing I’m born patient, and that some of it has rubbed over on Katja.
While waiting for our number Katja tells she learned something at lunch today. An English girl talked about a of a stinging sensation while bathing at the beach. We’ve felt that to, on one of the beaches we visited. She said it was Sea lice. I googled it while sitting here waiting, and it’s absolutely plausible. It’s not really a live, but a larva of the jelly fish. It has the stingers of mommy and daddy, and can thereby cause the stinging feeling if it’s caught in a crevice like your elbow or your armpit. Or, like for the unlucky English girl, when it’s trapped between clothing and your skin. The best remedy it’s to use sunscreen, but as the girl explained; there are some places you for obvious reasons don’t apply sunscreen. Poor girl.
Finally it’s our turn. It’s four ten and after closing hour. “Why you come in afternoon?”, the official barked at me. I went with:” I trained Muay Thai in the morning.”, as an appeal to his national pride. I don’t think it went all that well, as he continued to bark: “Next time come in morning!” A lot of “Yes, sir” later we have extended our possible stay until June 12th.
During our processing they asked for another photo as well. A photo we were given back together with the passport. We didn’t quite catch the reason for either delivery or returning of the photo, but thanked and got out. Wet had just fired up the motorbike when the assistant to the grumpy official came running after us. “Sir, madam, sir, madam.” Breathing heavily from the ten meter run she exclaimed: “Need the photos!” Luckily we had them readily available, she thanked us and disappeared inside. We looked at each other, shrugged and headed out to get coffee. One and a half hour is probably not so bad a wait here. If your going to do it go early (they open 8:30), bring all papers and a book.
We went back to the place we had coffee when we visited Phuket town the first time. It’s still amazingly good coffee, and we celebrated today’s visa extension with an Oreo cheesecake. Yummy. The Circle is the name of the cafe.

Katja got hungry again and dragged me across the street to a local Chinese inspired restaurant. It claimed to be “Phuket original Hokkian noodle.” Hokkian is a region in China if I got it correctly, and judging from the food here a place worth visiting. We enjoyed pork, curry and some serious chili. Double yummy.

This is the place

Wet napkins from Laos airlines. We always keep these when we get extra on the plane. Never know when you need one.

This is what real hairy, seed-full chili looks like

Last on today’s to-do list was getting a new HDMI cable. The one er bought in Myanmar is to long and to crappy. We lose picture about five times during a forty five minutes episode. A quick stop by the Central Festival mall, and voila!

Security check point passed. The huys in th background checked under the seats of every motorbike.

Look at the big eyes we got! Even Piglet

The new Samsung phone has an app with the camera to enhance the eyes in selfie mode. Only in Asia, I guess

We got home just as the sun went down and we returned the bike, sat down and relaxed.
Oh, and we did anther thing, but that ain’t for sharing just yet. 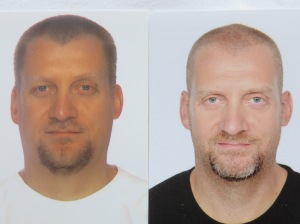 The heavier and younger version of me vs. me at the time we were in the Philippines. I found these while looking for photos to use in the Visa Extension. Katja wanted to know how much self-tanning-cream I used in the earlier days…

Wisdom cannot be imparted. Wisdom that a wise man attempts to impart always sounds like foolishness to someone else … Knowledge can be communicated, but not wisdom. One can find it, live it, do wonders through it, but one cannot communicate and teach it.