Some state repeatedly that “Karma is a bitch!”, but do they know what Karma is, and how it works? I have written one explanation in an earlier post, and today I think we reaped on the good side. Read on for a picture heavy post.

The day started without any big fuzz really. Katja went of to do Power yoga with Emiliy down at the Barn, while I took another day off training to make sure I’m “good to go” when I get back in the game. While Katja was away I secured the motorbike for the day, and drove up to the post office. As some may remember from yesterdays post, we needed to get some kind of stamps for the Visa Extension papers. Easy peasy! The post office lady was very helpful, and I was soon on my way down the road again. I picked up Katja and we started today’s adventure together.

First off we went to the Babi Guling place I mentioned yesterday. It was delicious. Ibu Oka 3 – the place to be for suckling pig in Ubud.

Then we needed to deliver all the papers to the Vista Extension lady. As the signatures where in place from our local sponsor (after I had secured the before mentioned stamps), and the money changed hands – it was no trouble at all. So we now awaits the passports in return with extended visas.

– Get a new compact camera down in Denpasar

– Buy a stone figure to place on the terrace back home, and secure shipping

2 out of 3 ain’t bad! (A great song by MeatLoaf by the way, but you already knew that, right?)

We drove of during the midday heat ad sat a course for Denpasar. Ubud is a quite little village compered to the mayhem in traffic you’ll find in Denpasar. Still, with the same “go with the flow” mentality as before it went relatively well. Before we got to enter Denpasar a man rode up next to us and asked where we’re from. While we where driving down the road. And where are we going? We talked a little, and he suggested that we should stop for a coffee at a place just down the road. We had talked about having a cup of java (see what I did there?) on the way down, and decided to stop. Little did we know that this was a “AgroTourism” place. They had plants of different spices and coffee and we got taken on a round of the complex. I was thinking of my friend and colleague Mathias Garm while doing this. It would not surprise me if had been here as well. The place was really cool, and after the short round (pictures below) we got to taste all the products they sell, but for one. The “Luwak coffee”. Read the text on the following picture to see what it’s all about.

How to make Luwak Coffee

How could we say NO to trying this poop-coffee? For 5$ we had cup to share and it was just brilliant. Traditional Balinese coffee is powder coffee that you mix into water, and will leave powder in the drink afterward. This was made without any grains in the coffee, and was just nice tasting coffee through and through. After we had finished our tasting we ended the tour, through the shop. Surprise! But we did buy two teas and to coffee types. Including the poop-one. 🙂

Us tasting tea – Poop coffee in the middle

We went off course more than once, but managed to get back on track and find the camera store we had set out for. That was close to a joke. They had nearly no cameras in store, but luckily they pointed us to the next store in their chain with promises of size and selection. Did I mentioned we got lost? We absolutely did, and when we asked about the way towards the street we were looking for, a guy (who barely spoke a word or two of English) pointed into the wall, and said: “blah blah blah- in here – blah blah blah”. We did what he asked and the video below shows what a narrow path he sent us into. The video is in Norwegian as Katja did the recording while sitting behind me and squeezing her knees as hard as possible. Check out the corners we went round. But it worked, and we exited into the right street! Karma 2 – Bitch 0

We found the camera shop, and behold! There was competent staff and a OK selection of cameras. As we are Canon users from before we ended up with a SX700 HS. I hope you’ll find better pictures on here from now on. To prove that, here is a picture of our salesman:

After this we thought of getting more coffee and set out for “Chico Coffee”. At least it sounded to us that way. It’s actually spelled JCo, but hey! we found it and we had a nice little Latte here. And check out the cup, just like our mantra for today.

Enjoy a coup of happiness

By now we agreed that the bird park had to wait if we were to get some serious stone shopping done. We were especially looking for a Ganesha statue. (There will be a post on Ganesha in a day or two). When we asked our landlord about this, there was no hesitation:”You have to go to Batubulan!” It’s a little village a bit south of Ubud, and if we were to get up there before it was dark we had no chance of doing the bird park. Well well, off we go again. This time with at bit of a change: Katja had now the iPhone with Google maps while we drove around. Even thou we missed a turn or two, we always knew where we were and could fix the situation. We arrived up at Batubulan about an hour before dark. As we have just missed another turn (yeah, I know, I’m a lousy driver) we stopped to check what back roads we could take. While we’re at it a guy with a kid on back seat stops and asks us “How we’re doing”. I chat a little with him while Katja looks at the map, and when I tell him what we’re looking for he smiles:”Near my house!” So we set off after him and followed in around turns and curves and thought for a moment that this was a waste of time. But Karma 3 – Bitch 0! 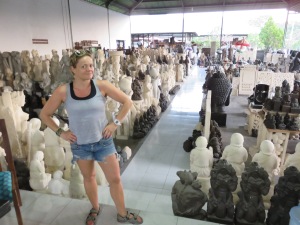 Just a small part of the sculptures available

The place was huge! And had a lot of different pieces to choose from, both in type of stone and in shape. We ended up buying four different pieces (well, actually we bought three and got the turtle for free), and have made arrangement for shipment back to Norway. It’s important that Bendik don’t get to soft and comfy in his retirement (which nobody really believes he has taken anyway) so we have sent the shipment to him 🙂 We have no idea how long it will take “That depends on Singapore”, but maybe it’s there before X-mas. Since the minimum shipment was 1 cubic meter, we had to fill it up as full as we could. This is what we’re sending back home. 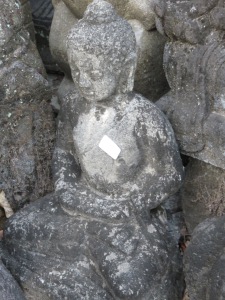 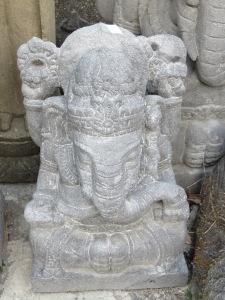 And we have no idea what happens to VAT and taxes, but the price is not high so the cost of taking it into Norway should be manageable. These “small” little stones are now to be scraped clean, as there can be now moss on them when exporting, or rather importing I believe. Then they’re off to colder climate.

At this point we just smile and try to think what we have done to deserve this kind of Karma today. Whatever it is, we’re thankful. Complete strangers in random situations has made great impact on the day, and all to the better. We just kept on smiling.

From there on it was a night ride back to Ubud. As it gets dark a 18:30 we had a, how should I put it, interesting ride back. As the sun goes down, the sunglasses comes off, and the bugs come out. I had to stop the bike at several occasions to A) Get bugs out of my eyes or B) Get the bugs out of my ear. I probably eat 10-15 bugs as well, but that’s not really a reason to stop, is it? Take the protein and shut up! 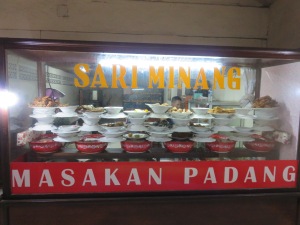 The window of a typical Pandang

We dined (a fancy word for eating at these local places, but anyway…) at a new Pandang. The picture show the food in the window and this is what you choose from, along with some rice. It was really good, and today we learned from a chatty guy at the neighboring table that Pandang is a Sumatran concept. The Warung, where you order by menu, is Balinese – The one where you pick from the laid out food in the windows is Sumatran. New friends, new knowledge. The same guy looked at Katjas plate and said: “You will not need to eat again until tomorrow evening!” He had a point.

So now, as we end the day, we try to recapture what we have done, and how it all felt. It is hard to put into words how a day like this has been. How much the smells, colors and noise make a part of such a journey. How the smiles of total strangers make me smile. How you feel when people just starts to talk to you, because it looks like you need help or don’t know in which direction to go. All this is hard to put into words, but they are an integral part of the experience we share when we do this. Maybe we’ll get better at coloring the stories with these things as the we move down the road.

And regarding dinner – Last night we had a very nice dinner with a couple of Norwegians here in Ubud. There have been little Norwegian to be heard around here, but Ida practice Yoga together with us. We dined with them last night, and met Espen who is working as a programmer for a company back in Norway. They have been moving around the world since November last year, and will keep it up for a few months more. So cool. We ate at a place called La Ramona. Now rated (on TripAdvisor) as the number 1 restaurant i Ubud. It’s hard to keep up with the demand and number of clients when you rank so high, but the chef did an excellent job and produced amazingly good food. We talked with him when we left the place, as Ida and Espen have met him on several occasions before. He is a one-man-show in the kitchen, and I just tip my hat to him for that. We’ll go back there another day, for sure.

Until then, be happy with what you got. There is always someone out there that would like to walk in your shoes – no matter how YOU feel right now.

Be safe, be cool, and stay frosty!